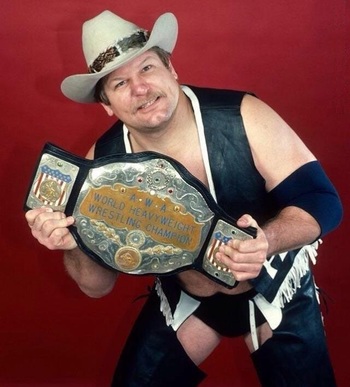 The Bad Man from Borger
Advertisement:

John Stanley Hansen II (born August 29, 1949) is a retired American Professional Wrestler from Texas. He is best known for his long and very successful career in Japan. He started his career in the 1970s in the Funk family's Western States Wrestling promotion in Amarillo, TX. He first made his name by breaking WWWF World Heavyweight Champion

Bruno Sammartino's neck with his "Lariat" clotheslinenote It actually was the result of a botched bodyslam. Among his many achievements, he is a former AWA World Heavyweight Champion

. He is also on the list of wrestlers who bodyslammed André the Giant prior to Hulk Hogan doing it at WrestleMania III, doing the deed in All Japan Pro Wrestling in the early 1980s. (Though Hogan also did it several times before that match, as well.)

"The Bad Tropes from Borger, TX":