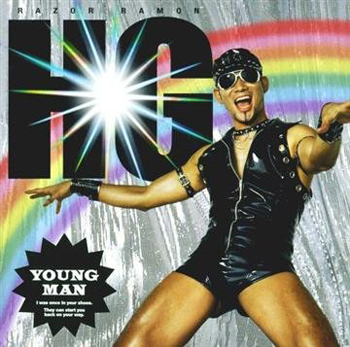 "U-Foooooooooooooooooo! Welcome one and all to my TV Tropes page! HOOOOOOO~!"
"The wrestling persona of comedian Masaki Sumitani, Hard Gay is the embodiment of every offensive gay stereotype you've ever heard, wearing an S&M fetish outfit meant to make him every heterosexual's worst nightmare."
—Elsa Moriarty on a certain Cracked article mentioning Hard Gay.

Hard Gay, or Razor Ramon Hard Gay, is the stage name of a Japanese comedian and professional wrestler, Masaki Sumitani (born December 18, 1975). To grossly simplify his act, his main gimmick was dressing in leather gear and pelvic-thrusting in the name of attempting to help people in need... whether they want it or not. He's fairly well-known in many parts of the world, though he dropped the Razor Ramon stage name a while back, some time after being outed as straight while being caught on a date.note He is now married to former idol Anna Suzuki, the woman he was dating.

Not to be confused with the tropes concerning muscular, homosexual men. For that, see either Manly Gay, Macho Camp or Leatherman if you're thinking of burly men of leather.