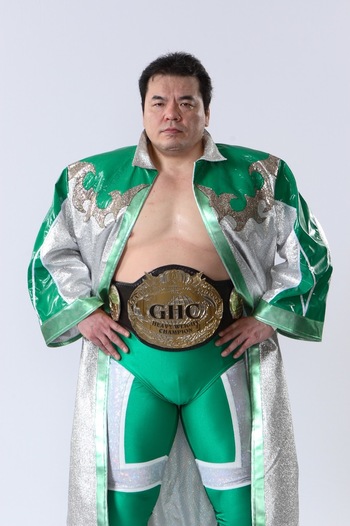 Mitsuharu Misawa (June 18, 1962 – June 13, 2009) was a Japanese professional wrestler, primarily known for his work in All Japan Pro Wrestling during the 90's and Pro Wrestling Noah in the 2000's. Misawa began his career as one of the many men under the Tiger Mask gimmick that AJPW had licensed, but his talent was clear and his ability to carry and control a match's storyline had caught the attention of the booker, Giant Baba. Baba, who had just found himself without a big new star to build, decided to take a chance on Misawa, unmasked him, and began his first truly big feud, against Jumbo Tsuruta, and eventually got Misawa to be the first "Heavenly Pillar" of AJPW, when he got a shock win over Tsuruta in 1990, and created his "Super Generation Army", and it all could've been a mere "what-if" had Giant Baba not heard the raucous reaction that he generated before the show even began.

Throughout the 90's, Misawa was unquestionably AJPW's ace, only possibly equated by the other three pillars, Kenta Kobashi, Toshiaki Kawada and Akira Taue. His never-say-die attitude, his ability to fight through any sort of danger and his well-rounded abilities meant he was without peer and the few times he ever lost AJPW's Triple Crown Heavyweight Championship were largely tainted by outside interference or by injury, and he almost always won it back to the adulation of his fans, and there were a lot of them.

But as the new millenium approached, the punishment he had put himself through throughout his career had become a major problem for him, as he'd have to take extended breaks to heal his knees and his myriad other injuries. Further, he was beginning to disagree with Giant Baba's business acumen, having to plead with fellow wrestlers to do a Tokyo Dome show, and had found his way into a booking role in order to help the ailing Baba. In 1999, he finally dropped his belt for good to Toshiaki Kawada...only to find out a week later that Giant Baba had died. And his wife, Motoko Baba, was now head of the company, and Misawa was now Company President.

This was a problem for both, as Motoko was infinitely less of a risk-taker than her late husband, and she and Misawa butted heads long-before either were in any position of power. Finally, Misawa could stand no more, and in a power play the likes of which hasn't been replicated in wrestling to date, he announced to AJPW's TV company that he was going to leave AJPW, and take a good portion of the roster and production crew with him to start his own promotion: Pro Wrestling Noah. They agreed, and it was done.

From there, it was like the action of AJPW never ended, as he was finally able to do the things he had felt were necessary to make the wrestling he wanted to see a priority, and made NOAH must-watch TV with the successful pushes of many supremely talented individuals and often collaborating and competing directly with other companies in inter-promotional feuds. Unfortunately, by the mid-2000's Misawa had run into a problem: while he had a slowly growing audience, his core fanbase was... Misawa fans. And while he had resisted being champ again, he put the belt on himself in order to keep the lofty ambitions of NOAH afloat and keep the money coming in. He decided that he was going to retire by the end of 2009, spending the remainder of that time getting over his hand-picked successor Go Shiozaki.

Tragically, he would never get to see Go win the GHC World Heavyweight Championship, as on June 13, 2009, in a tag team team match, Misawa took a back suplex, and never got up again. He was rushed to the hospital, where he was pronounced dead. Misawa's death sparked numerous promoters and wrestlers in Japan to begin taking injuries more seriously, and sent shockwaves throughout the Puroresu community.

Misawa is considered one of the greatest professional wrestlers of the 1990's and early 2000's, having the largest amount of recognized five star matches in history, and having been so decorated in AJPW and NOAH that it's almost impossible to successfully recount them all.