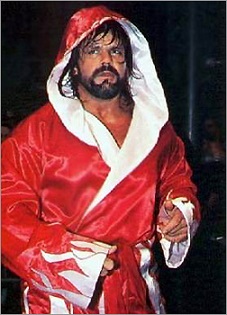 "Stitch me up doc, I got a match tonight!"
Advertisement:

Steven Williams (May 14, 1960 – December 29, 2009) was an American amateur and professional wrestler from Lakewood, CO best known for his work in Mid-South, WCW and, especially, for All Japan Pro Wrestling from the 1980s into the 21st Century. He debuted in 1982 for Mid-South, being billed from Norman, OK, and teamed with Ted DiBiase against Eddie Gilbert and the Nightmare (Randy Culley, aka Moondog Rex/the first Demolition Smash). Williams won the renamed UWF's World Heavyweight Title

. He was included when National Wrestling Alliance promoter Jim Crockett bought out the UWF in 1987. He turned Heel and joined Kevin Sullivan's Jerk Jock Power Stable The Varsity Club in late 1988. After the group disbanded, he went over to Japan, where he would achieve his greatest success. He would hold the All Japan Triple Crown Heavyweight Title

once and the All Japan World Tag Team Title

in 1992. He also competed for ECW. He died of esophageal cancer in 2009. He was inducted into The Wrestling Observer Newsletter Hall of Fame in 2011.

Not to be confused with "Doctor" Stevie Richards. Or "Stone Cold" Steve Austin, whose given name when he started wrestling was Steven Williams.