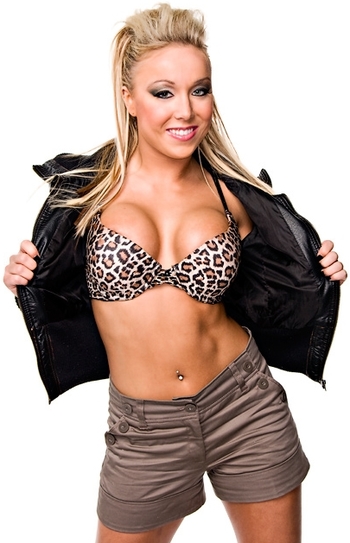 Shantelle Larissa Malawski (born January 26, 1986) is a Canadian retired personal trainer, power skating instructor and former professional wrestler. Trained by El Fuego, she made her pro wrestling debut in 2003 at the age of 17 and worked for several independent promotions across Canada(winning her first title belt in New Vision Pro Wrestling), USA (most notably SHIMMER), Mexico and South Africa before being offered a WWE developmental contract in 2006, performing for Deep South Wrestling and FCW before being released in 2007.
Advertisement:

However, she is best known for her time in TNA from 2008-2010 where she performed as Taylor Wilde. She is a one-time TNA Knockouts Champion and a two-time TNA Knockouts Tag Team Champion with her partners Sarita and Hamada, while also becoming the first TNA Knockout to have held both titles and managing to hold half of the WSU Tag Team titles for a day during this time. After departing from TNA, Malawski announced her retirement from professional wrestling and wrestled her final match on February 5, 2011. She became a firefighter and took to studying psychology at York University.

In 2021, Taylor Wilde makes a comeback to Impact Wrestling ten years after her initial retirement.

Tropes pertaining to Taylor Wilde include: