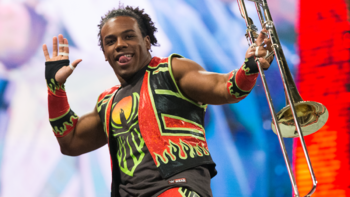 The Bard of the New Day.
Advertisement:

Austin Watson (born September 4, 1987) is an American professional wrestler. He currently wrestles for WWE under the ring name Xavier Woods, as part of the stable The New Day. He began wrestling in 2005 and wrestled for many independent promotions, including territories of the historic National Wrestling Alliance, mostly as Austin Creed, an Affectionate Parody gimmick of Apollo Creed. In late 2007 he was picked up by TNA and worked for them under the modified ring name Consequences Creed until his release in 2010. He then made a few appearances with New Japan Pro-Wrestling, before ultimately being signed by WWE and placed in their developmental system. He got his start on the main roster as a member of The New Day, inevitably being the group's mouthpiece and "manager" (though he still wrestles himself).

He has been a tag team champion in multiple promotions, including NWA Anarchy

with Jay Lethal, and WWE

called Up, Up, Down, Down, which features he and some WWE Superstars playing video games as well as interviews with some superstars. Since 2018, he's been a regular on the D&D webseries Acquisitions Incorporated as Bobby Zimeruski, a Goliath barbarian obsessed with cheese. He's currently a regular host for the relaunched G4TV, appearing in various streaming videos before the official relaunch in November 2021.