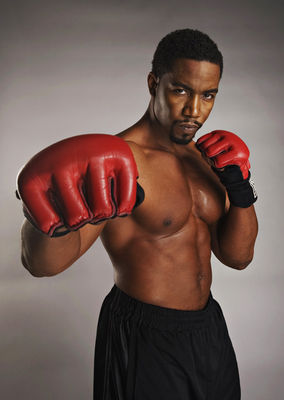 "I want to continue to do some great work. I'm nowhere close to where I want to be. I'm a diverse person who's trying to use his art to make the world better."
Advertisement:

Michael Jai White (born November 10, 1967 in Brooklyn, New York) is an American actor and martial artist who has appeared in numerous films and television series. He is the first African American to portray a major comic book superhero in a major motion picture, having starred as Al Simmons, the protagonist in the 1997 film Spawn. White is also known for his performances as boxer Mike Tyson in the 1995 HBO television movie Tyson, Marcus Williams in Why Did I Get Married?, Why Did I Get Married Too?, and on the TBS/OWN comedy-drama television series Tyler Perry's For Better or Worse, Jax Briggs in Mortal Kombat: Legacy and the title role in Black Dynamite.

Prior to his acting career, he was a teacher for special needs children.

As an accomplished martial artist, White (who started training at the age of eight) holds black belts in eight different styles: Shotokan, Tae Kwon Do, Kobudo, Goju Ryu, Tang Soo Do, Wushu, Brazilian Jiu Jitsu and Kyokushin; with a specific focus in Kyokushin (although his style incorporates aspects of many different martial arts forms) and has also trained in Muay Thai and kickboxing.

Tropes applicable to his works: