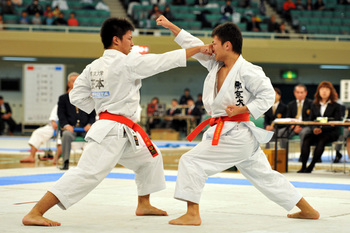 Round 1. Fight!
I split the atom with my high kick, baby
I am a master 'cause I practice daily
With aaaaatoooomiiiiic karate!
—Tupper Ware Remix Party, Atomic Karate
Advertisement:

Karate (translated originally as "Chinese hand" and later as "empty hand") is a Japanese martial art and combat sport. It is based mainly around striking, utilizing plenty of strikes of all sorts with the hands and feet (and more rarely knees and elbows), as well as some kinds of throws and joint locks in certain styles.

Undoubtedly the most known traditional martial art in modern popular culture, almost to the point of antonomasia, karate has hundreds of millions of practitioners around the world and is mostly governed by the World Karate Federation. The "mostly" part comes from the fact that, unlike other mainstream martial arts, there is no unanimous conception or ruleset about the art: instead, it is composed of a myriad of independent schools and associations around the world and most of them manage their business in their own way, with the WKA being relegated to host unified sport competitions which every school might comply or not to compete. This is due to the traditional and decentralized evolution of karate, which can be traced to its very roots.

Although it is considered a quintessential aspect of Japanese culture, karate was actually born in the Ryukyu Kingdom before it was conquered by Japan, and it was shaped by the influence of the more geographically nearby China, with Southern Chinese kungfu being its main inspiration. After weapons were banned by its conquerors, Ryukyu and especially Okinawa developed a series of unarmed fighting styles (as well as some based on makeshift weapons) in order to fight back the invader. Karate remained thus as a very regional characteristic for centuries until an Okinawan scholar by the name of Gichin Funakoshi introduced it to mainland Japan. Soon, other schools both old and new followed, and the sport was established.

Practitioners of the sport are called Karateka. Equipment consist solely of a white uniform called the karategi or keikogi (sometimes abbreviated as "gi"), composed of a loose jacket and pants tied with a belt called an obi, which actually comes from and was adopted from the judogi used in Judo. The practice of the art itself can be separated into kata (sets of individual, rehearsed movements designed to build muscle memory), bunkai (interpretation of kata to create functional techniques), and kumite (good ol' sparring, equivalent to randori in judo and jujutsu).

As mentioned, karate is divided on schools or styles, most of them diverging a lot in their approaches to things like philosophy and technique. Those are the main ones: