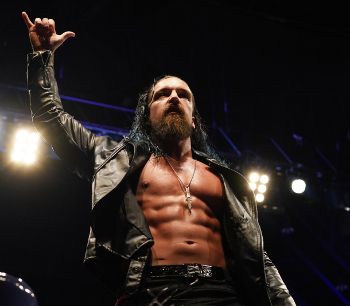 Breathe with The Switchblade
Advertisement:

White first traveled to England to start his training to become a professional wrestler, coming under the tutelage of The UK Kid and making his debut for Kid's promotion Varsity Pro Wrestling in February 2013. He would make his way through the British independent circuit for companies such as VPW and All Star Wrestling, before a tag team match in 2014 saw him paired up with Prince Devitt, who was so impressed with him that he put in a word for him with New Japan Pro-Wrestling, beginning a turn of events where Devitt, Bad Luck Fale, and Shinsuke Nakamura would all facilitate White being brought into the NJPW dojo as a young boy.

Going through the dojo starting in 2015, he spent a year and a half there before the company sent him out on foreign excursions, where he began becoming a regular rising star with ROH and RevPro. During this time he became best known as one of the prospects that Alex Shelley and Chris Sabin were actively helping bring forward through the business, eventually joining them in a collective known as Search & Destroy which frequently butted heads with the ROH members of Bullet Club.

Finally, in late 2017, NJPW saw vignettes aired for a mysterious dark character called "Switchblade". This turned out to be the returning Jay White, with "Switchblade" as his new motif and nickname in a deliberately Darker and Edgier persona. Instantly marking his intention to make NJPW "his kingdom", he first challenged Hiroshi Tanahashi for the IWGP Intercontinental Championship at Wrestle Kingdom 12 in 2018, coming up short. However, this only reinvigorated his drive, which Kenny Omega, and the rest of NJPW, found out the hard way, starting when Omega attempted to invite White to join Bullet Club only to be introduced to a downward spiral which saw White capture Omega's IWGP United States Championship, later overtake Omega's position in Bullet Club as part of a long-running scheme, and finally take the IWGP Heavyweight Championship from Tanahashi, making White the fourth youngest IWGP Heavyweight Champion of all time, ushing in his new era, the Cutthroat Era of Bullet Club.

Consistently hovering near or within the NJPW main event picture even after losing the championship in April 2019, he became the IWGP Intercontinental Champion later that year, as well as the first person to successfully take the Wrestle Kingdom Contract briefcase away from the winner of the G1 Climax in 2020, both victories which played him into the IWGP Heavyweight/Intercontinental double gold sweepstakes of Wrestle Kingdoms 14 and 15. Despite coming up short both times to the very men that he beat heading in, Tetsuya Naito and Kota Ibushi respectively, White recovered after a brief sabbatical to defeat Tanahashi again, becoming the first NJPW Quadruple Crown Champion by virtue of his NEVER Openweight Championship victory in May 2021. And yes, this is STILL his era. It's the REAL Era.

"Trope with the Switchblade!":