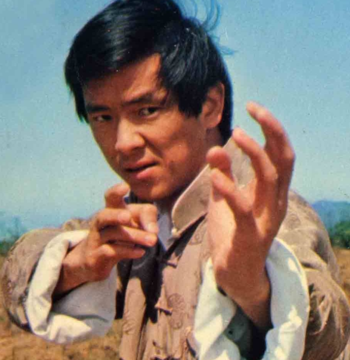 Yes, he still has both of his arms.
Advertisement:

Jimmy Wang Yu (王羽; born Wang Zhengquan; March 28, 1943 in Shanghai, China) is a Taiwanese actor, director and film producer, most popular in the west for his role as the eponymous character in the One-Armed Swordsman movies as well as Master of the Flying Guillotine.

Born in a rich family, Wang had a long and colorful life, on and off-screen. Prior to landing his career as an actor, he served in the National Revolutionary Army and was a champion swimmer and athlete. At age 24, Wang landed his Star-Making Role, The One Armed Swordsman, and quickly made himself a popular name amongst the various mega-stars in Shaw Brothers' roster of action icons, most prominently in Wuxia films.

Wang made his directorial debut with The Chinese Boxer, which is often cited as the defining martial arts film responsible for launching the unarmed combat genre, notably involving overpowered main characters (since in the film, Wang is frequently shown killing people with his bare hands just by punching and kicking), and initiating a phenomenon that filled the ranks of many Chinese martial arts associations across Southeast Asia. But due to Wang's rising popularity, he decided to jump ship from Shaw Brothers, causing said studios to completely blacklist him from making films in Hong Kong. At this point, Golden Harvest studios sees this as an opportunity to hire Wang into their ranks, with Wang's first film he made for Golden Harvest, One-Armed Boxer combining elements from both One Armed Swordsman and The Chinese Boxer.

Once the highest paid martial arts film actor prior to Bruce Lee, Wang Yu's many controversies and celebrity scandals made him a media sensation, from his lawsuit with Shaw Brothers (due to the above-mentioned contract breaking), to him allegedly killing a man in a nightclub brawl (Wang was acquitted on all counts due to lack of evidence) and his affair with actress Jeanette Lin Chui, who was seven years his senior and resulting in Lin Chui's husband committing suicide.

Nowadays retired from the action film industry, Wang occasionally made public appearances in the news media only for interviews or talks.

Jimmy Wang is married twice and had three daughters; the eldest is Linda Wong, who is a singer.

According to Screen Rant, Jimmy Wang-yu is currently the deadliest film actor of all time

, whose onscreen bodycount reaches up to 2477 victims. The accuracy of its source still remains to be confirmed.

Tropes related to this performer