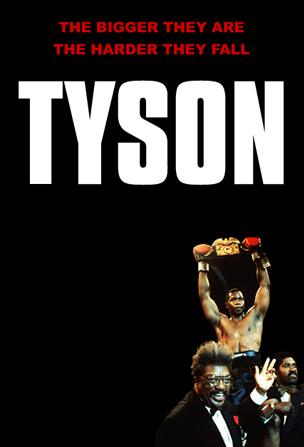 The bigger they are, the harder they fall.
Advertisement:

Tyson is a 1995 docudrama, produced by HBO Pictures, that focuses on the early career of Mike Tyson and his fall from superstardom in The '90s.

Mike Tyson (Michael Jai White) sits in a courtroom and reflects on what he's done to get to that point. Flashing back to his childhood in New York, a young Tyson gets caught up in gangs and is arrested many times for violent behavior.

Several years later, Tyson is in a boys' home when boxing manager Cuz D'Amato (George C. Scott) sees him training at a local gym, and offers to take Tyson into a group home with other aspiring boxers. With the help of Cuz and his trainer Kevin Rooney (Clark Gregg), Tyson quickly establishes himself as a force to be reckoned with, and is chosen as a contender for the USA Junior Olympics, where he easily dominates his opponent. However, Tyson's many scandals and rebellious behavior keep getting him into trouble with the law and members of Cuz's family, and Cuz's untimely passing leaves a hole in Tyson's life.

As Tyson wins the World Heavyweight Championship, the people Cuz warned Tyson about begin to work their way into his inner circle, including Robin Givens (Kristen Johnston), an actress who preys on Tyson's sympathy and attempts to control his finances, and famed boxing promoter Don King (Paul Winfield), who steals Tyson from his previous manager Bill Cayton. Tyson's fall from grace culminates in him losing a match against Buster Douglas and being accused of raping a Miss Teen America contestant.

The film was an adaptation of the 1987 book Fire and Fear: The Inside Story of Mike Tyson, and aired a month after Tyson's release from prison in 1995.