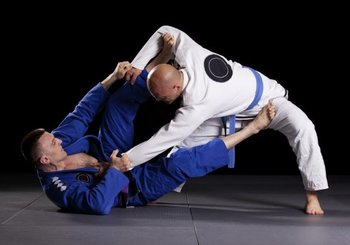 Hold me tight.
"The ground is my ocean, I'm the shark, and most people don't even know how to swim."
— Carlos Machado
Advertisement:

Brazilian jiu-jitsu (BJJ) is a Japanese-Brazilian martial art and combat sport. A derivate from Judo and other styles, it is a grappling art heavily specialized on groundfighting, either wearing a gi or without it.

BJJ was born in the spectacle fighting circuit of Brazil at the beginning of 20th century, when Japanese judokas like Mitsuyo Maeda, Soishiro Satake and Geo Omori arrived to submit opponents for money in circuses and to found schools to teach. Its popularity as a challenge art placed it among other grappling styles like Catch Wrestling and its many forms, which caused some interesting feuds and rivalries after Carlos Gracie, a Renaissance Man of dubious activities, adopted it as his family's business. Through outrageous challenges, good marketing and a gradual differentiation from judo, the Gracie clan created a martial tradition that soon clashed against other styles, among them Oswaldo Fadda's similar jiu-jitsu school and Euclydes Hatem catch-inspired Luta Livre. Over time, the name Gracie became synonymous with this martial art.

Those battles had place in what would become the Vale Tudo competition circuit, in which everything goes (actually not, but almost) and which gave birth to Mixed Martial Arts in United States when the Gracies decided to export the format to expand commercially, a venture they called Ultimate Fighting Championship. Although UFC started as merely a style vs. style pamphlet designed to sell BJJ, the latter would prove instrumental in the worldwide expansion of MMA, either by endorsing it or by moving other martial currents to try to grab a piece of the cake. Its techniques are still part of the basic instruction of mixed martial arts in every country that is not Japan, where catch wrestling often occupies its place, or the former Soviet bloc, where Sambo and Japanese influences used to be the norm, to the point that all MMA groundfighting is often nominally piled together on it.

Brazilian jiu-jitsu stands out among modern martial arts for being a deeply social environment, almost an entire subculture by itself, very dedicated to training and rooted in Brazilian societal traits. The art's comparatively low injury rate, well structured system of teaching, and market-friendly approach all have carved a surprisingly solid place for it in United States, even if it is still generally a very niche sport everywhere with some lingering stigma in its native country (namely, that only brawl-loving rich Brazilian kids train it).

Its practitioners don’t have a particular title like "judoka" or "karateka", although jiujiteiro used to do the job in the original Portuguese. In the same way, BJJ instructors are usually referred as Professor, as it simply means "teacher" in Portuguese, and sometimes coral belt-ranked ones will also be referred as "Master" (Mestre) and red belts as "Grandmaster" (Grão Mestre), although most gyms won't strictly enforce it as in other eastern martial arts, as you can see instructors begin called everything from "Coach" to their first names.

Also, more similarly to karate than judo, there is not a single body of government for BJJ, but rather a number of schools and federations with their own approaches, the largest of which are:

Brazilian Jiu-Jitsu has a distinctive belt system, marked by informality in promotion criteria and also by the length of time between promotions. Promotion is not organized under formal tests, but given by the instructor when he feels the student has learned, usually after success in competitions. Due the long time between promotions, some instructors also award stripes (Pontas) placed on the black bar (or red bar in a black belt) in the tip of the belt. Ages below 16 years have a separate ranking system, which has more belts and faster promotions to increase motivation, when they turn 16 they are automatically promoted to blue. The belt system was first devised after the creation of the Jiu-Jitsu Federation of Guanabara (which also introduced other aspects such as organized competition to turn BJJ into a sport) in 1967, it was initially based in the Judo belt system used in Brazil note White, Grey (Junior), Blue, Yellow, Orange, Green, Purple, Brown, Black, and before the system was a simple White for students and Dark Blue for professors, some practitioners started to wear a Dark Blue belt (most notably Royce Gracie) as a form to protest a percieved commercialization and "dilution" of Jiu-Jitsu.

Spotting Brazilian jiu-jitsu in media can be tricky, as most of the its central curriculum of techniques comes directly from judo, is similar to sambo and has been adopted by mixed martial arts, meaning there is a huge amount of overlap between the four. It doesn’t help that many famous BJJ practitioners typically practice one of the other three too.