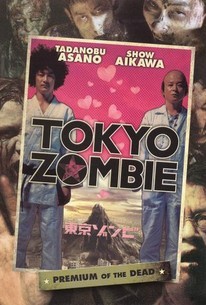 Tokyo Zombie is a 2005 Japanese zombie comedy, based on a manga of the same name and comparable to Shaun of the Dead and Zombieland.

Next Sunday A.D. in Tokyo a landfill has massively over-grown to become known by the populace as Black Mount Fuji, a place where anyone can go to dump anything they want and not be questioned about it or bother with pesky environmental safety laws. It is also a very popular place to dump bodies (living or dead). Eventually through radiation, the anger of the dead bodies, and mis-dumped recyclables in the landfill, the dead rise again as zombies. The main characters are Mitsuo and Fujio, a couple of Brazilian Jiu-Jitsu enthusiasts who bumble their way through the zombie hordes. Half way through the movie there is a Time Skip of five years where all the rich people have made a safe zone in the remains of Tokyo and use the poor people they saved from the zombies as slaves. To entertain themselves they host zombie fights; pit matches between various fighters and zombies in which Fujio competes.

Has nothing to do with Tokyo Ghoul.