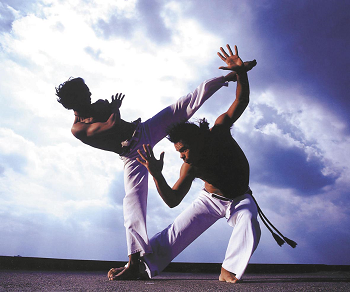 Capoeira is an Afro-Brazilian martial art which combines fighting with performance art. It's a very recognizable style with its emphasis on acrobatics, attacks from the ground, feints, and spinning kicks, frequently all at the same time. Dating back at least to the 18th century, the art spread first throughout Brazil, from poor blacks to wealthier classes, and throughout the world in the latter part of the 20th century.

Its origins are hazy and debated, but it emerged as a fighting style among the slaves of Brazil. According to legend, the elements of dance existed partly so that the slaves could mask it as a cultural activity unrelated to fighting, while the kicks and leg sweeps would have been emphasized so slaves could fight with their hands chained. It evolved to be a favored fighting style among criminals, and at various times in Brazilian history, it has been declared illegal to practice. As a result, much of the known history is based on stories and legends.

Capoeira is substantially different in execution to most other martial arts, to the point some believe it would be fitter to call it an "art" without any adjective. Its way to spar is the roda, a circle formed by practitioners singing and playing music where the goal is not destroying the opponent, but rather having the most awesome exhibition of skill possible at the music's beat. There is certainly an element of making the opponent look worse than you, which can involve striking, tripping and countering, but this is generally done in a hit-and-run way rather than an all out exchange; there is no true way to "win" or "lose", and the interaction is more akin to a dialogue than a fight. Only some groups endorse beating the crap out of each other, and even they stress the importance of the dancing and acrobatic aspects, which are as important in capoeira as the martial side.

Capoeira as practiced today stems primarily from two schools created in the early 20th century, Regional and Angola, but there have been more styles.