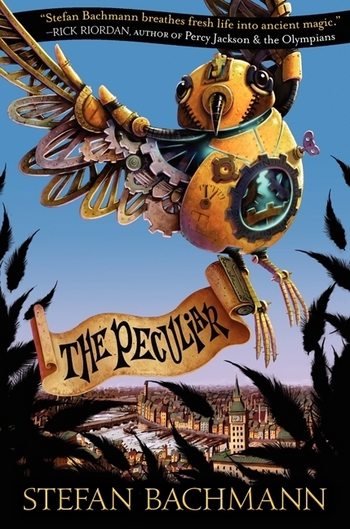 Bartholomew Kettle and his sister Hettie are changelings, also known as Peculiars—half-human, half-fae, and scorned by pretty much everyone. Forced to stay hidden inside the house for his own protection, the only thing Bartholomew wants is a friend, and when the closest thing to it—the Peculiar boy from across the street—vanishes into a ring of black feathers at the hands of a mysterious lady in plum, he sets out to find out what's going on and hopefully find another friend—forgetting the rules and getting himself noticed. Seriously noticed.

And Now for Someone Completely Different.

Arthur Jelliby is too nice to be a very good politician. All he wants is to sleep until noon, make social calls, and spend time with his darling wife, but when Parliament gets involved with the sinister circumstances around the recent murders of nine child changelings, Mr. Jelliby—quite by accident—finds himself investigating the powerful Lord Chancellor Lickerish, and promptly decides to set out and stop Child Number Ten from meeting the same ghastly fate as his predecessors.

Child Number Ten, who, due to some unfortunate circumstances, happens to be Bartholomew.

Steam Punk meets The Fair Folk in this Gaslamp Fantasy by Stefan Bachmann—one of the Indie Next List's top ten books for Fall 2012.