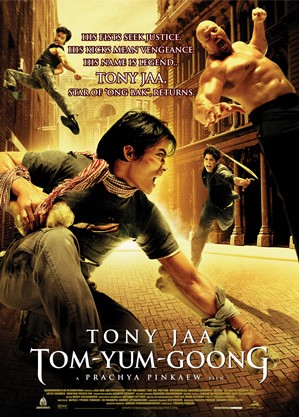 "...most people call Tom-Yum-Goong 'Where's my goddamn elephant!?' because every scene is him bursting into a room hoping to find his elephant. And if that fails, plan B is punching fucking everything."
— Seanbaby, telling it like it is.
Advertisement:

Tom-Yum-Goong (Thai: ต้มยำกุ้ง; IPA: [tôm jɑm kûŋ], distributed as Warrior King in the UK, as The Protector in the US, as Thai Dragon in Spain, as Revenge of the Warrior in Germany and as Honor of the Dragon in French) is a 2005 Thai martial arts film starring Tony Jaa. The film was directed by Prachya Pinkaew, who also directed Jaa's prior breakout film Ong-Bak. As with Ong Bak, the fights were choreographed by Jaa and his mentor, Panna Rittikrai. In the United States, it was endorsed by Quentin Tarantino as "Quentin Tarantino Presents: The Protector".

In Bangkok, the young Kham was raised by his father in the jungle with elephants as members of their family. When his old elephant and the baby Kern are stolen by criminals, Kham finds that the animals were sent to Sydney. He travels to Australia, where he locates the baby elephant in a restaurant owned by the evil Madame Rose, the leader of an international Thai mafia. With the support of the efficient Thai sergeant Mark, who was involved in a conspiracy, Kham fights to rescue the animal from the mobsters.