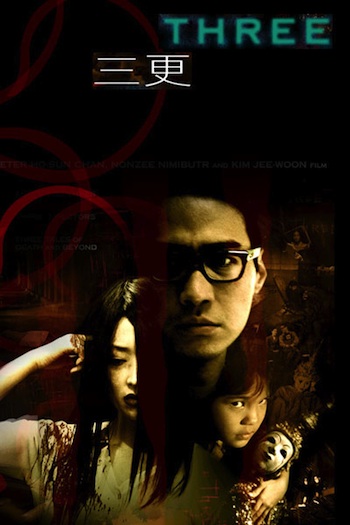 It was followed by Three... Extremes, another Asian horror anthology. Because of the latter's success, Three was released internationally as "3 Extremes II'', basically making it a sequel to its own sequel.

A man goes to a psychiatrist to try to remember what happened the day his wife disappeared from his life. Meanwhile, his wife wakes up and finds herself lying on a deserted road, having no idea how she got there in the first place. She tries to find her way home. At the same time, her husband drives home to their apartment. Separately, they begin to regain their memories of what happened. Directed by Kim Ji-woon (whose credits include A Tale of Two Sisters, The Good, the Bad, the Weird and I Saw the Devil).

A Thai village is terrorized by cursed puppets. Directed by Nonzee Nimibutr.

While searching for his missing son, a cop, Wai, finds himself detained by his neighbor Yu, a Chinese physician, in his apartment. Yu has been tending to the body of his dead wife for three years, apparently believing that his wife is still alive and will wake up in a day or two so they can go home together. Directed by Peter Chan.