Film / I Saw the Devil 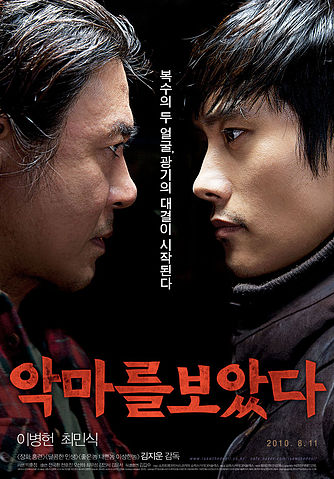 I Saw the Devil is a 2010 South Korean revenge action-thriller film directed by Kim Ji-woon (A Tale of Two Sisters, The Good, The Bad, The Weird, A Bittersweet Life) and starring Lee Byung-hun and Choi Min-sik.

After his fiancée is horrifically and indiscriminately murdered, government agent Kim Soo-hyun (Byung-hun) vows to avenge the murder by any means necessary. He eventually finds the killer in Jang Kyung-chul (Min-sik), a psychopath to whom kidnapping, raping and murdering young women come as easy as breathing.

Considering how close to home his offense is, Soo-hyun decides to take matters into his own hands in regards to giving Kyung-chul what he deserves. What ensues is a cat-and-mouse game in which both men vow to destroy the other's life, and while Kyung-chul isn't willing to give up the last laugh without a fight, Soo-hyun runs the risk of giving in more and more to his darkest desires...