Mummies at the Dinner Table 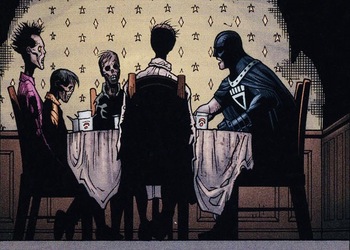 That awkward moment when dinner conversation goes dead quiet.
"I'm sorry now I killed you
For our love was something fine
Until they come to get me
I shall hold your hand in mine"
— Tom Lehrer, "I Hold Your Hand in Mine", Songs by Tom Lehrer
Advertisement:

So your precious child or Significant Other has tragically passed on to the next world. Well... so what? There's no reason why you can't still enjoy their company in this one. Granted, people might think you're a bit, well, strange if you dress your beloved's corpse in formal attire, tape a spaghetti fork to their hands, and engage in a nice (albeit one-sided) conversation with them every evening over dinner. But they just wouldn't understand, not having suffered such a crushing loss themselves. Decomposition? What decomposition? Your loved one looks just as good as they did the day they... stopped moving for themselves and became less talkative. But they're still alive! Yes, they are. Anyone who tells you anything different is obviously confused, or jealous of your relationship. Yes...that's it...they're jealous, and they must be destroyed as soon as possible...before they're able to spread any...nasty rumors about you...

As you can probably see, the (living) people at the center of this are usually not "firing on all cylinders" — assuming, of course, that they still have any cylinders left to fire. This is usually because they just can't accept the loss of someone who was close to them, and would rather live in an alternate self-created reality where that person is still alive. This loss, of course, can be even more crushing if they themselves were responsible for their beloved's death in some way.

The lover or "protector" of the corpse will frequently speak to them and imagine them speaking back, although this is not to be confused with a Dead Person Conversation, which is a conversation that may actually be taking place between a character and a spirit from the next world. Or even Talking to the Dead, where a character expects no answer but has to vent. No. In order for a situation to qualify as Mummies At The Dinner Table, one of the participants must be stone-cold dead and the other must be stone-cold crazy. Needless to say, the living one will often come across as a bit creepy to other people, even those who know nothing about their cosy little private life. Sometimes, however, the obsessed mourner will appear to be absolutely normal and personable — up until the Peek-a-Boo Corpse moment when the heroine accidentally walks into the room where their "beloved" is sitting. Then the mourner will go Ax-Crazy, and a classic horror chase will follow which may or may not end in the death of the hapless discoverer.

A lighter variation of this trope has the mourner obsessing over a beloved pet that he had stuffed and keeps around him, petting it and talking to it as though it's still alive. This is often played for comedy in the shows where this kind of thing is apt to appear.

There is also an evil variant, with a mortal foe instead of a friend or lover. Note that these cases only fit the trope if the keeper treats the corpse as if it were a live captive; more commonly, the villain knows perfectly well that the victim is deceased and is keeping the body around as a memento, a trophy, and/or a warning to others.

A Sub-Trope of Mundane Horror. Compare with I Love the Dead, Necromantic, A Love to Dismember. If the character can't believe or accept that someone has just died, it's Please Wake Up (if the denial grows into systematic self-deception, that trope can evolve into this one). If the character deceives other people while knowing the truth himself, it's Of Corpse He's Alive. If the target is not dead but merely pining for the fjords, it's Dude, She's Like, in a Coma!.

This trope also does not apply to a person who is fully aware that the loved one is dead and treats the corpse as simply a(n often disturbing) form of memento. Such behaviour usually indicates mental problems, but of entirely different sorts.