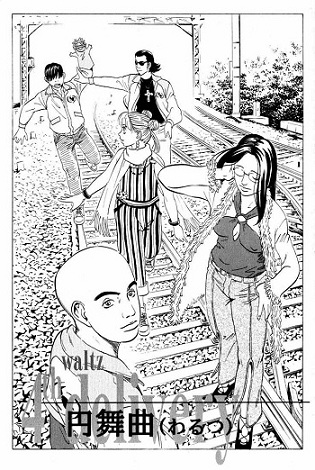 "Just your ordinary, everyday delivery men." From the bottom and up: Karatsu, Sasaki, Makino, Numata, and Yata/Kereellis.
"Listen, Mr. My-karma-is-oh-so-spotless, we're running a business here, not a charity. Did you check the corpse's credit?"
— Sasaki
Advertisement:

The Kurosagi Corpse Delivery Service is a Black Comedy horror manga written by Eiji Otsuka and illustrated by Housui Yamazaki.

Answering an ad for volunteer work for extra credit, five students of a Buddhist university meet up at Aokigahara Forest, a real-life suicide spot. Kuro Karatsu, the viewpoint character, appears normal, but the rest are slightly... unusual. Ao Sasaki runs an internet chat room for people who like to share pictures of corpses. Makoto Numata can use a pendulum to dowse, but can only find dead bodies. Keiko Makino is a licensed embalmer in a country where close to 100% of bodies are cremated. And finally, Yuji Yata constantly wears a hand puppet that he believes is possessed by an alien called Kereellis.

As Karatsu decides that he doesn't really want to get mixed up with these weirdos, he turns to leave...and finds a corpse has crawled up behind him. His secret's out — he can talk to the dead and listen to their last wishes. Sometimes, the dead come to him. When the events caused by the dead man's testimonial have all finished, Sasaki gets an idea: There's not much demand for what the group can do amongst the living, but there's always dead people. Some are bound to be grateful, the folding cash kind of grateful, for what they could do for them—generally by giving the group permission to sell their belongings (after all, it's not like they'll need them anymore).

Thus is created the concept of the Psychopomp For Hire, and so begins a dark, gory, squicky, yet frequently funny exploration of death and dying in Japan, and quite a few horror tropes as well. It's interesting for its episodic style; apart from the characters' back-stories and the arc regarding the origin of Karatsu's powers, most chapters are self-contained. The realistic art style and top-notch translation make it something definitely worth reading, for those with a strong stomach.

The manga began serialization in 2002, starting out in Shonen Ace and later moving to the seinen magazine Young Ace in 2009, where it's still ongoing. The first 14 volumes were released in the States through Dark Horse Comics. The initial release then ended, but in 2022 it was announced that they would be releasing omnibuses containing at least one of the remaining seven volumes, allowing for some hope that the entire series might be published in English one day.