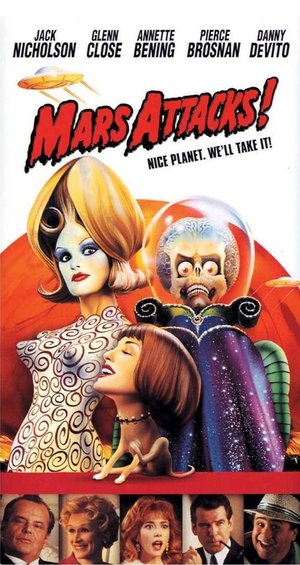 Mars Attacks! was originally a trading card series from Topps published in the early sixties. Created by Wally Wood, the series depicted an Alien Invasion of evil Martians colonizing Earth and exterminating all life on the planet in the style of EC Comics horror and science fiction stories at the time. The 55 cards that made up the series were quickly discontinued due to Moral Guardians who were horrified by the series' violence. In the 80s, another series of cards with a similar premise was released, known as Dinosaurs Attack!. In the 90s the property would resurface in the form of new trading cards and a comic series. A movie soon followed.

The 1996 movie adaptation was directed by Tim Burton and depicted gleefully destructive Martians animated by Industrial Light & Magic as opposed to the more violent and terrifying versions seen in the trading cards or comics. Notable for its all-star Ensemble Cast, including Jack Nicholson, Lukas Haas, Annette Bening, Jim Brown, Pierce Brosnan, Sarah Jessica Parker, Glenn Close, Martin Short, Rod Steiger, Michael J. Fox, Jack Black, Natalie Portman, note Do not confuse the below examples of Natalie the character with her Pam Grier, Danny DeVito, Tom Jones, Frank Welker and Jack Nicholson (again). Hilarity Ensues as most of them are jokingly killed off with bizarre weaponry as cheesily as possible. Despite underperforming at the box office and getting a tepid critical reception at the time, the film has developed a modest cult following since its release through frequent TV showings, and it's now widely considered one of Burton's best films.

The movie has gotten a lot of attention for its numerous striking similarities to Independence Day, that other throwback to classic alien invasion stories released in 1996—which chose to play the premise completely straight rather than mocking it. Beyond having almost exactly the same premise, the two films also feature the President of the United States as one of the main characters, and they feature several near-identical scenes, characters, and story beats. The creative team behind Mars Attacks has maintained that this was a coincidence, as they were mostly unaware of Independence Day while making the film.

Amusingly: much the same thing happened in 1964 with the films Fail Safe and Doctor Strangelove—which also have almost exactly the same premise, but play it completely differently (one is a drama, the other is a comedy). Doctor Strangelove also famously featured Peter Sellers playing multiple characters, much like Jack Nicholson does in this film.

The Martians later appeared in the Walmart ad "Famous Visitors" for Super Bowl LIV in 2020 that has them ordering pick-up.

In 2012, IDW Publishing launched a new ongoing Mars Attacks! comic series. This later led into a crossthrough event where, in one-shots, the Martians attacked such characters as the Transformers, KISS and even Popeye.

President Dale explodes at his General for egging him onto war.

President Dale explodes at his General for egging him onto war.