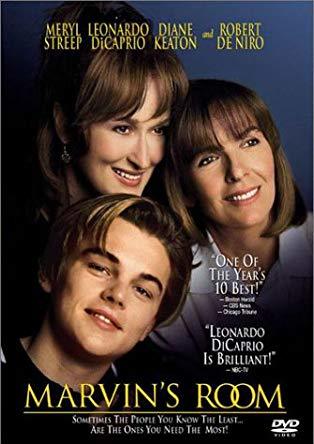 Marvin's Room is a 1996 drama film directed by Jerry Zaks featuring an All-Star Cast, and is based on the 1990 play of the same name by Scott McPherson.

The film depicts a bed-ridden old man being taken care of by his daughter Bessie in their Florida home, and totally ignored by his other daughter Lee, who moved to Ohio with her husband 20 years ago and has never contacted her family. Her teenage son, Hank, sets fire to the house and is committed to a mental institution. Now, Bessie's doctor has informed her that she has leukemia and needs a bone marrow transplant. Bessie turns to Lee, who finds out she may have to take over her father's care, so she begins searching for nursing homes. Eventually, however, the estranged family grows close. As Bessie progressively gets worse, Lee comes to terms that it is now her turn to take care of her family.