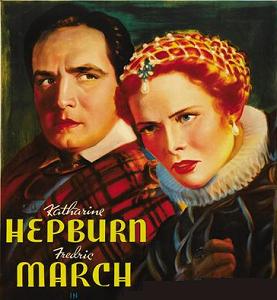 "What's my throne? I'd put a torch to it for any one of the days with you."
Advertisement:

Mary of Scotland is a 1936 Historical Romance film from RKO studios, recounting the life and love of Mary, Queen of Scots, directed by John Ford and starring Katharine Hepburn and Fredric March.

The film, based on a successful blank verse drama by playwright Maxwell Anderson, is an example of Hollywood History at its most extravagant — but it is less the numerous historical inaccuracies than the wild melodramatics affected by every performer (excepting perhaps only John Carradine). Mary of Scotland was a financial disaster and one of the films responsible for making Hepburn "box office poison" until her career was revived by The Philadelphia Story in 1940. Director John Ford was reportedly so disgusted at being slated to oversee a "woman's picture" that he took to leaving the set early and even delegated the direction of one of the romance scenes to Katherine Hepburn herself!

Nevertheless, the film is undeniably handsomely mounted, with attractive costumes by Walter Plunkett (which, indeed, started a mini-fad for in 1936 for Scottish styles) and striking high-contrast black and white cinematography by Joseph H. Augusta. Ford may have disliked the narmy script and loveydovey romantic plot, but seems to have enjoyed deploying his actors and the various masses of extras in an almost balletic fashion in several sequences in which the characters are essentially wordless while the soundtrack (by RKO second-string composer Nathaniel Shilkret) establishes the requisite romantic mood, often with surprising success.

Ford also developed great mutual affection for Hepburn that lasted until his death in 1973.

In the sixteenth century, Queen Elizabeth I (Florence Eldridge) learns that Mary Stewart (Katharine Hepburn) has returned to Scotland to take her throne, while refusing to yield her claim to England. The Scottish lords, under the lead of the treacherous James Stewart, Earl of Moray (Ian Keith), have been using the fanatical preacher, John Knox (Moroni Olson), to defame Mary as a dissolute persecutor. Mary finds support in the person of the bluff Earl of Bothwell (Fredric March), with whom she falls in love, but, angered by his presumption and urged by her Catholic secretary David Rizzio (John Carradine) to marry a Catholic, to strengthen her claim to the English throne, she weds the drunken, effeminate Lord Darnley (Douglas Walton). Darnley, despised by all and insanely jealous, conspires with the lords to murder Rizzio. Thereafter the lords blow up (no, really) the feckless Darnley and seize Mary and her infant heir, James VI. She escapes to Bothwell, who "forces" her to marry him; denounced by John Knox, Bothwell agrees to leave Scotland, so long as Mary is left on the throne. However, as soon as he is gone, the lords betray her. Mary escapes to England, seeking aid from Elizabeth — who instead imprisons her. She is tried for conspiracy against Elizabeth; having heard meanwhile of Bothwell's death in prison, she accepts her condemnation to death. Elizabeth comes to her secretly to offer a last chance if she will renounce her claim to the throne, but Mary rejects her offer, taunting the English queen with her loveless life and the fact that Mary's son will inherit Elizabeth's throne. She then goes to her death — hearing as in a vision the pipers of Bothwell announcing her apotheosis.

Interestingly, Ginger Rogers tried out for the part of Elizabeth under the pseudonym "Lady Ainsley," much to the annoyance of Katharine Hepburn, who detested her (and actually kicked her at one point during the screen test). At one point Hepburn is said to have lamented the fact that she could not play both queens, on hearing which, Deadpan Snarker John Carradine remarked: "If you did, how would you know which one to upstage?" The part eventually went to Fredric March's wife, Florence Eldridge.

Tropes Employed in this Film Include: