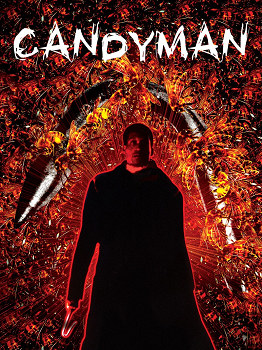 The Candyman can... KILL YOU.
Advertisement:

A very common trope used mostly by children's novels, and sometimes by young adult novels. In an attempt to appeal to kids, many authors or often publishers will give books silly titles that have nothing to do with the actual content of the book, which is often a realistic drama. Executives apparently assume that kids (or parents) will only buy something that they think is funny, but actually genuinely enjoy it if the story turns out to be a Tear Jerker.

As a result, what is essentially a bait and switch is pulled. Lure the kid in with the humorous title and possibly cover art, but once the kid is reading, the book gradually turns into more and more of a drama. Sometimes a very depressing one, at that.

Often deliberately invoked with horror films, as well, in which case, it's not so much a case of Covers Always Lie as it is a comparable trope to the Ironic Nursery Tune.

In the examples, please list what the book is actually about in addition to the title and what it might refer to. Books that actually are silly obviously do not fit this trope. For this reason, it tends to be used in works running on Surprise Creepy.