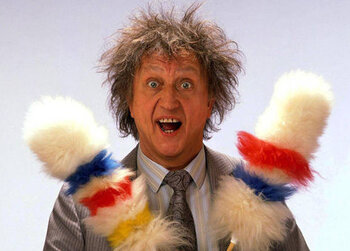 "There's one thing about my shows, folks; you always go home in the daylight!"
Advertisement:

Sir Kenneth Arthur Dodd OBE (8 November 1927 – 11 March 2018), was a veteran variety entertainer, singer and comedy legend from Liverpool. One of the last music hall greats, the inventor of the 'tickling stick' (feather duster) was also renowned for his old jokes; He'd been carting some around since the 1970s.

Commonly known throughout the United Kingdom as "Doddy", Dodd was most famous for his longevity – the length of his career (1954 to 2017), the comedian's 42-week span of his record-breaking run at the London Palladium in 1965, but (most of all) for the duration of his performances, which regularly ran for 3 to 6 hours. He performed in every theater in the country, several times over, throughout his life.

He was also a surprisingly accomplished singer in the 1960s, his most famous hit being "Happiness", and was well versed in Shakespeare.

Ken received an OBE in 1982 and a knighthood in 2017 for services to entertainment and charity.

Doddy continued working up until Christmas 2017, when his health worsened and he spent six weeks in hospital for a chest infection. Despite being discharged in February, he passed away in March. He married his partner of 40 years two days before he died... as a final two fingers to the Inland Revenue, as there's no inheritance tax on estates left to a spouse.

"What a beautiful day for listing Ken Dodd's tropes!"