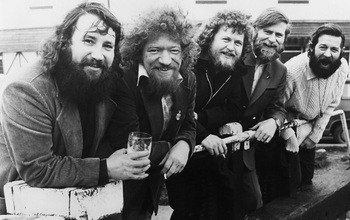 The Dubliners were an Irish folk band founded in Dublin (duh) in 1962. Originally named Ronnie Drew's Ballad Group, they got popular playing in pubs in Dublin and elsewhere. They were partly the harbingers of the 60s Irish folk revival.

Their original set, including long-runners like Black Velvet Band was arranged by Dominic Behan, who also contributed original material. Barney McKenna was largely responsible for popularising the now-common technique of playing the tenor banjo tuned to GDAE, an octave below the fiddle, as an accompaniment—the original lineup included Luke Kelly playing a 5-string but they were looking for something distinctive.

Tropes associated with The Dubliners: