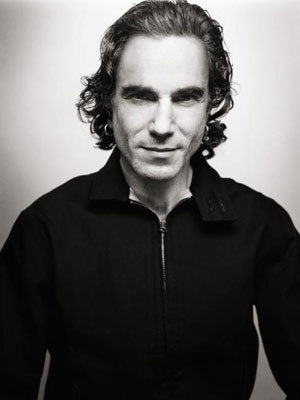 For this article, Mr. Day-Lewis actually turned himself into a web site.
"I suppose I have a highly developed capacity for self-delusion, so it's no problem for me to believe that I'm somebody else."
Advertisement:

He has starred in such acclaimed films as My Left Foot, The Age of Innocence, The Last of the Mohicans, In the Name of the Father, Gangs of New York, There Will Be Blood and Lincoln.

His father was British Poet Laureate Cecil Day-Lewis, while his maternal grandfather was the film producer Michael Balcon. He's married to Arthur Miller's daughter Rebecca Miller, an accomplished writer in her own right, whom he met while filming The Crucible. Prior to that, Lewis had a relationship with French actress Isabelle Adjani, with whom he has a son. He famously ended that relationship by breaking up with her over fax.

Lewis is considered an actor who never compromises on any role, fully giving in to each role he plays, working very hard on every part he plays. This made it hard for him to function as a stage actor, where the great immersion into a role, makes it harder to repeat night after night. One famous incident, had him breakdown during a production of Hamlet where the Prince confronts the ghost of his father. Lewis later admitted that he had seen his own father's ghost on stage and this scared him off from appearing on stage ever again. He was far better suited to film, and even then as he grew older, his dedication and commitment to each part made it harder for him to continue with the next film and role. He retired after finishing The Boxer in 1997, dropping off the grid and apparently spending time working as an apprentice shoe-maker in Florence. This was until Martin Scorsese convinced him to return in Gangs of New York. This was the biggest and most high-profile role Lewis ever played in his career until then. It was also very different from his earlier parts. Before Lewis had played sensitive, albeit intense, highly vulnerable men, and generally he played heroes. Bill the Butcher however was a flamboyant Large Ham villain who was supremely macho and charismatic. The result was a performance that some consider one of recent cinema's most iconic villains.

This started a new phase for Lewis where he has been highly selective (some six films between 2002-2017), but has achieved a degree of fame and respect that overshadowed his already commendable career before his first retirement. He won an Oscar for My Left Foot in his first phase, and he won two more in the second one : for There Will Be Blood and Lincoln. His Oscar win for the latter made him the first man to win the Best Actor Oscar three times, the first actor to win an Oscar for any Spielberg film, and the only person so far to win an Oscar for playing an actual American President. Lewis announced a second retirement after Phantom Thread, on June 20, 2017. He called it "a private decision"

. By this time, Lewis attained the status of being considered the best actor of his generation, with some considering him the equal of Laurence Olivier, Marlon Brando, and Robert De Niro at their best.

This actor provided examples of: