Film / In the Name of the Father 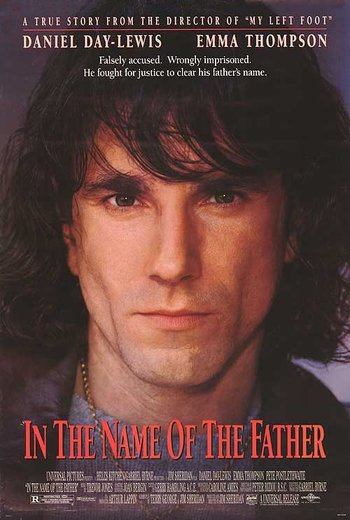 Based on a True Story, this 1993 drama is directed by Jim Sheridan and stars Daniel Day-Lewis, Pete Postlethwaite and Emma Thompson.

It chronicles the ordeal of the Guildford Four

, a group of three young Irishmen and their Englishwoman friend Wrongly Accused of bombing two soldiers' pubs in Guildford, England in 1974. At the height of The Troubles, all four were involved with drugs and petty crime, a profile the British police (wrongly) believed fit the IRA. In fact Gerry Conlon (Day-Lewis) left England to get away from the IRA who had threatened him for committing theft. After the bombing, police acted on a tip, arresting the four (and later Conlon family members, including Gerry Conlon's father Giuseppe). Coerced into falsely confessing by the police, the Four were convicted by this along with junk science indicating nitroglycerin traces on their bodies at trial, with the Irishmen receiving life sentences and their English friend fifteen years. Six other Conlon family members were also convicted on lesser charges and received sentences ranging from six to fifteen years in prison, including Giuseppe.

Gerry and Giuseppe are imprisoned together in one of the hardest British prisons, having to fight at first to survive inside. They meet one of the real bombers, Joe McAndrew, after he is locked up with them. Joe confirms their innocence, but the police do not want to hear it. Gerry briefly falls under McAndrew's spell, to Giuseppe's alarm, but his presence secures their status in the prison and he leads a protest which drives out the guards. The riot squad soon retakes the wing, however, and McAndrew swears revenge. Following this, an English lawyer, Gareth Pierce (Thompson), inspects things with an investigative commission after the riot, and tells Giuseppe she will look into his case. Gerry angrily tells her to not give him false hope. Still, in time all of the real murderers they are with recognize them to be innocent, and even the chief warder Barker seems to have doubts after getting to know the gentle, beautific Giuseppe. Gerry's affinity with McAndrew ends when he leads his fellow prisoners in a brutal attack on Barker for retaking the wing, and he is transferred to another prison in solitary confinement. After Giuseppe's premature death due to ill health exacerbated by prison, Gerry embarks on a quest to prove himself innocent with the help of Gareth, leading to a stirring and magnificent conclusion.

In the Tropes of the Father:

Prisoners mourn the death of Giuseppe Conlon, who died in prison for a crime the authorities knew he didn't commit.

Example of:
Due to the Dead

Prisoners mourn the death of Giuseppe Conlon, who died in prison for a crime the authorities knew he didn't commit.