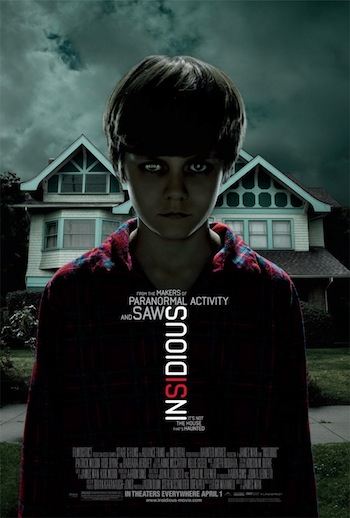 "It's not the house that's haunted."
— Tagline
Advertisement:

Insidious is a series of thriller/horror films centered on paranormal investigators who protect people from beings hailing from a supernatural dimension known as "the Further". The films were produced by Oren Peli (Paranormal Activity), and Jason Blum, under his production company, Blumhouse Productions, and written by Leigh Whannell (Saw).

The first film was directed by James Wan, Whannell's frequent collaborator and director of the first Saw, and released in 2011 after premiering in a film festival several months earlier. The story centers on the Lambert family, consisting of father Josh (Patrick Wilson), mother Renai (Rose Byrne), and their three children, the oldest being ten-year-old Dalton. As they begin to settle into a new home, they experience strange noises and other unexplained phenomena. Soon Dalton is rushed to the hospital after slipping into a coma shortly after falling off a ladder in the attic. Months slip by, and the doctors still have no explanation for his continuing coma. When the boy is returned home under his mother's care, more frightening events occur in the home. The mother is so horrified that she moves the family to another new home in hopes of leaving the fearful memories behind them.

The family quickly discovers that the haunting has nothing to do with their home, but rather from Dalton. A team of paranormal experts, ghost-hunters Specs (Whannell) and Tucker (Angus Sampson) and psychic Elise (Lin Shaye), observe Dalton, the family, and their home. They determine that Dalton is trapped on the other side in a dark world they call The Further. The parents team with them to try to bring their boy back from The Further and save him from the clutches of a dark entity that hopes to claim him as his own.

The original follows a similar formula to the film Poltergeist where an evil supernatural force abducts Dalton's spirit for their own ends, except they want to possess his physical body for use on this side rather than keep him and his physical body on the otherside. Similar to Poltergiest, Josh must cross over to the otherside (The Further) and rescue Dalton from his prison only with Astral Projection. Unfortunately, Josh can't imagine what dangers await him in this plane of the dead and an old nemesis from his childhood awaits his arrival.

The second film, Insidious: Chapter 2, was released on September (Friday the) 13th, 2013 and once again directed by Wan (who also gets story credit with Whannell). It follows the fallout of the first film as the Lamberts try to move on from their previous experiences by moving to the residence of Josh's mother, Lorraine (Barbara Hershey). However, it's soon made clear that the haunting has not yet stopped and in fact increases by a magnitude. The family race through time trying to discover the truth behind it and determine what connection it has with Josh, who seems to become the new target of haunting.

The third film, Insidious: Chapter 3, is a prequel and was released June 5, 2015. Wan stepped down from the director role (though he remained as a producer for this film and subsequent installments), replaced by Whannell in his directorial debut. The film is set several years before the events of the first film and focuses on Quinn Brenner (Stefanie Scott), an aspiring young theater actress who longs to speak with her deceased mother, Lillith. However, her life takes a turn for the worse when a mysterious entity starts to stalk and physically endanger her. Quinn's father (Dermot Mulroney) and brother contact Specs and Tucker and a jaded Elise, still recovering from the death of her husband, to help them save Quinn.

The fourth film, titled Insidious: The Last Key, was announced in 2016. It was released on January 5, 2018 and directed by Adam Robitel (The Taking of Deborah Logan), while Whannell also takes on producing role along with Blum, Peli and Wan. It is an Interquel, set between the events of the third and first films. Elise has been confronted by nightmares about her past back when she was a girl living in an abusive household in the fictional town of Five Keys, New Mexico, before being contacted by a man living in her former home, claiming it to be haunted. She, along with Specs and Tucker, venture out to find out what's going on and to put Elise's past to rest.

A fifth film was announced in 2020

and will be directed by Wilson in his directorial debut, with Scott Teems writing the screenplay, based on a story treatment by Whannell. In addition to directing, Wilson will reprise his role as Josh alongside Dalton's now-adult actor, Ty Simpkins. The plot will pick up a decade after the events of Chapter 2 as Dalton begins college.

Photographs revealed the presence of The Bride in Black.

Photographs revealed the presence of The Bride in Black.