Film / The Taking of Deborah Logan 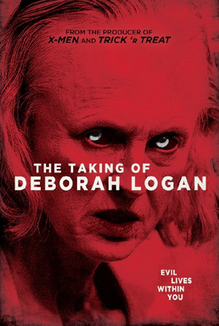 The Taking of Deborah Logan is a 2014 Found Footage horror film presented as a documentary. A group of 3 college students - Mia, Gavin, and Luis - head to Exuma, Virginia to live with an aging Alzheimer's patient, Deborah, and her daughter Sarah to record the progression of the disease, as well as the toll it will (hypothetically) take on Sarah to give the level of care needed to her mother as she deals with the illness. However, as the illness worsens, Deborah starts to exhibit signs of something else altogether.

"The Troping of Deborah Logan":