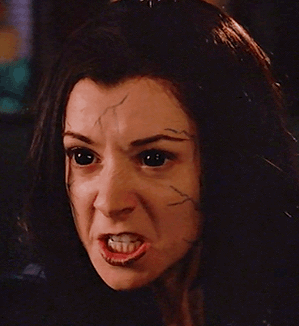 Traditionally, a cheap and easy way to show that a character is evil is the use of colored contact lenses in live action, or colored or glowing eyes in animation. Since the 1990s, however, a new trend has emerged — the Black Eyes of Evil.

These days, when someone is possessed by demons, dabbling in the dark arts, psychically dominated by evil aliens, or gone evil in some other way, their eyes will go perfectly black with no whites at all.

Presumably this perfect blackness indicates the purity of the evil within them and their total lack of humanity. Even if a person's eyes are weirdly colored, there is still a possibility of human connection, but if his/her eyes are gaping wells of nothingness...

One interesting feature of this trope is that these black eyes will return to their normal state if the demon is exorcised/psychic link is broken/etc.

Alternately, a character's face can be shadowed in such a way that their eyes are completely hidden, or at most reflecting back a glint. Typically, these characters don't actually have black eyes and it's a temporary thing. This version can show up in characters who aren't the ultimate evil, merely sinister or mysterious. In many cases, heroic characters may also gain shadowed eyes in this way.

This can be surprisingly hard to tell apart from normal eyes in photos, because if a person has normal-colored eyes that happen to be deep-set or narrow to the point of looking squinty, then there won't be that much light hitting their sclera from most angles. It's easier to pick up on when the actor is in motion, and a lot more obvious in drawn art.

This is a subtrope of "Uh-Oh" Eyes, which, in turn, is a subtrope of Technicolor Eyes. These are also a specific type of Monochromatic Eyes; sometimes related to Prophet Eyes, which can also be used to indicate a supernatural or evil character, as well as Mind-Control Eyes, which are dull and flat-colored.

Now in Real Life, scleral lenses worn by persons with light sensitivity will render a person's eyes completely black, but that doesn't tell you if they are evil or not.

Contrast with Black Bead Eyes, where the eyes are simply black dots done as an artistic style. Compare Black Eyes of Crazy, where black sclerae plus technicolor irises equals Ax-Crazy, although both heavily overlap with one another. Compare also Excessive Evil Eyeshadow. Overlaps with Ghostly Gape.