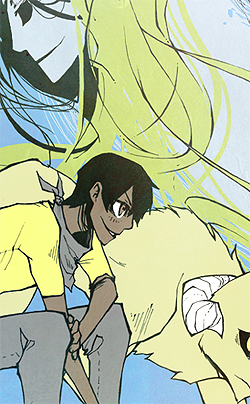 It's Beauty and the Beast. If the eldest sister had instead been an older brother. Who decides he'd sooner punch a beast in the face than send off his little sister. Also it’s a space opera/buddy cop series. Except that last one.
— In the words of the author
Advertisement:

is an Urban Fantasy webcomic by i-s-p

about a snarky guy named Adrian. One night his father comes home from a business trip with a cut on his arm and a story about a monster that wants Adrian's littlest sister, Chelsea. Not believing the tale, Adrian goes in her stead. Fun ensues.