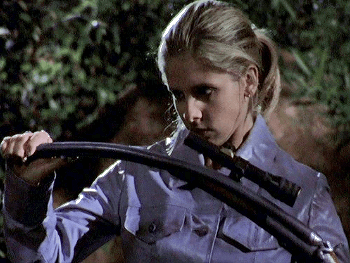 Things are looking bad now. You've made the monster really angry. It's going to beat down on you mercilessly. But it's all right; you think you can take this guy. You grab a metal beam to use as an Improvised Weapon and swing it away...

...except the monster has grabbed it out of your hands and has bent it into a nice right angle. For added threat, the monster could go the extra mile and twist it into a pretzel, and then discard the beam. This is generally a good signal to take the extra seconds you bought to turn and run as fast as you can. If the monster could do that to solid metal, imagine what it could do to human bones.

The beam need not be an actual beam; things such as swords or ray guns can also be bent to make a similar point that the foe has Super Strength and is not to be underestimated. Subtrope of Intimidation Demonstration.

Not to be confused with Extra-ore-dinary. Contrast Spoon Bending, when such a feat is performed with Psychic Powers instead of physical strength.