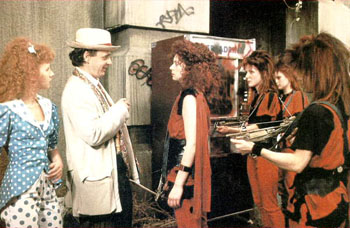 Those cantankerous Kangs got hit by The '80s worst of all!
"'No cause for panic'? Two of my next-door neighbours have just disappeared down the waste disposal chute!"
—Maddy
Advertisement:

The one with the killer swimming pool.

The Doctor and Mel decide to go and visit a famous housing project (because it has a nice pool), but it turns out that all of the fit adults left years before to fight a war. The block has devolved into bizarre anarchy, inhabited by colour-themed girl gangs called "Kangs", rampaging janitor robots, cannibalistic old women, a lone quixotic draft-dodger, rule-obsessed caretakers led by their tinpot dictator the Chief Caretaker (who takes fashion advice from Adolf Hitler), and the disembodied mind of the block's Ax-Crazy architect. Who is HUUUNGRY!

This was the first script commissioned by Andrew Cartmel (he inherited the previous script from his predecessor) and contains the first hints of his new vision for the show. Writer Stephen Wyatt would return the following season with "The Greatest Show In The Galaxy" and, much later, its prequel/sequel "The Psychic Circus".

Many years after it was aired, a Spin-Off sequel comic, Paradise Towers: Paradise Found was due to be published in 2021 by Cutaway Comics, featuring what happened to the Kangs (who now have considerably less '80s Hair).