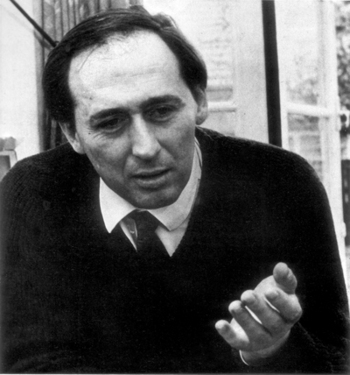 James Graham Ballard (15 November 1930 – 19 April 2009) was a British novelist, satirist and essayist. A literary titan in the field of science fiction, Ballard's most famous contribution the genre was the landmark post-apocalyptic epic The Drowned World. Considered a pioneer of the New Wave Science Fiction sub-genre, Ballard was known for his experimental narratives, controversial subject matter, and the surreal, nightmarish worlds his characters casually inhabited. The dehumanization of sex and technology were recurring themes in his writing.

The popularity of his work among fans gave rise to the adjective 'Ballardian' , which is defined by the Collins English Dictionary as: "resembling or suggestive of the conditions described in Ballard's novels and stories, esp. dystopian modernity, bleak artificial landscapes, and the psychological effects of technological, social or environmental developments."

The son of British expats based in China, J. G. Ballard was born in the Shanghai International Settlement in 1930. Following the Japanese attack on Hong Kong and subsequent takeover of the Settlement during World War II, the Ballard family were moved to an internment camp for the duration of the war. Despite a reasonably comfortable living situation, the young Ballard would sometimes witness the casual brutality of the Japanese military toward both the Chinese and Allied civilians. It's likely that this experience had a profound effect on him to the point where it influenced his writings as an adult.

After the end of the war in 1945, Ballard's mother returned to England with him and his sister. In 1949, he studied medicine at King's College in Cambridge with the intent of becoming a psychiatrist. He would spend a decade writing short science fiction stories and submitting them to various magazines, eventually dropping out of his studies to become a full-time writer by 1960. He married his first wife, Helen Mary Matthews, in 1955, and would move his family to Shepperton, Surrey, where he would spend the rest of his life.

Ballard published his first novel, The Wind From Nowhere in 1961, which would become the first in a series of novels about mind-bending apocalypses. He had begun submitting stories to various sci-fi publications such as New Worlds and Science Fantasy as far back in 1956 with the stories "Escapement" and "Prima Belladonna", the latter of which was set in the surreal resort of Vermilion Sands. He'd revisit the world of Vermilion Sands multiple times until 1970 and later compiled the stories into a collection of the same name. By the mid-60s, Ballard had published dozens of short stories, much of which had appeared in New Worlds magazine.

The UK's burgeoning new wave sci-fi movement was of interest to Ballard and he would shift the tone of his writing to much darker territories. Helen's death from pneumonia in 1964 would further motivate him toward a bleaker outlook on life and humanity. He compiled various short stories and novellas to form the iconic and highly controversial novel The Atrocity Exhibition. This novel was so problematic for the time that it led to an obscenity trial in the UK. The US publisher Doubleday would destroy most of the print run before its distribution. Despite these efforts from the establishment, The Atrocity Exhibition's experimental quality made Ballard a literary icon.

A very prolific author, Ballard wrote 19 novels and 98 short stories over a career that lasted five decades. Several of these were turned to movies, such as Crash, High-Rise, and the semi-autobiographical novel Empire of the Sun, which was about his childhood at the Japanese internment camp. One of his short stories, "The Drowned Giant", was recently adapted into a CG segment of Netflix's animation anthology series Love, Death & Robots.

J. G. Ballard passed away in 2009. He never remarried, but lived with his life-long partner Claire Walsh. His monumental output and influence on the science fiction genre can still be felt to this day in his native UK and beyond.