One Cast Member per Cover 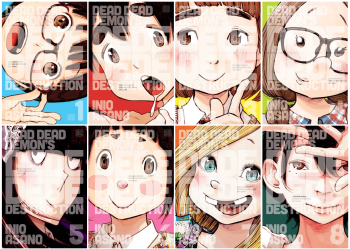 In a long-running series, it can sometimes be difficult to come up with new covers that are all distinct but clearly related to each other. One common strategy is to draw a different character on the cover of each volume.
Advertisement:

The first few volumes will usually show the main heroes and villains of the series, with supporting characters appearing on later covers. The covers may show only the current character's face or the character in some sort of action pose, but they will seldom show a scene from the story. While a character may appear on the cover of the volume where they are first introduced it is not uncommon for the character on the cover to play a small role in the story of the volume, or even not appear at all in the story. If the series continues long enough the illustrator might be forced to reuse characters but very rarely will the same character appear on the cover of consecutive volumes. If the point-of-view character varies from volume to volume often the point-of-view character for a volume will also be the one on the cover.

This trope is often used for Variant Covers. Compare Team Shot, where the main cast is pictured together on one cover.