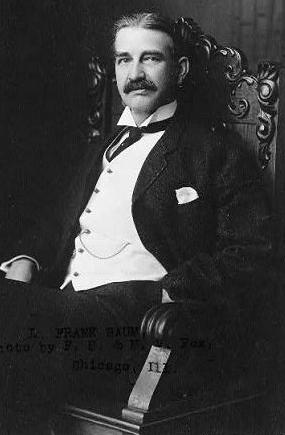 Not pictured: the ball and chain attached to silver shoes.
"When I was young I longed to write a great novel that should win me fame. Now that I am getting old my first book is written to amuse children. For aside from my evident inability to do anything 'great,' I have learned to regard fame as a will-o-the-wisp which, when caught, is not worth the possession; but to please a child is a sweet and lovely thing that warms one's heart and brings its own reward."
Advertisement:

Lyman (long for "L.") Frank Baum (May 15, 1856 – May 6, 1919) was an American author, best known for The Wonderful Wizard of Oz—a work so popular that, in fact, he was chained to the series and wrote Oz book after Oz book while longing to write anything else. He wrote the second Oz book to capitalize on the success of the stage version of The Wonderful Wizard of Oz, and although he didn't plan to turn it into a series, he was talked into writing four more books by the publisher. After trying to end the series at six books and move onto a new fantasy adventure series starring his characters Trot and Cap'n Bill, some bad theater investments and poor book sales necessitated his return to the Oz series after only a three year absence, which he would be stuck writing for the rest of his life. That the series was in no way pre-planned helps explain what a Continuity Snarl the Oz books are, as well as the fact that he often juggled various side projects while rushing out yearly Oz books, such as theater productions (arguably his true passion over writing) and later, silent films for his short-lived film studio. Baum also wrote many novels for adult audiences under various pen names; in total he wrote close to 80 books in his lifetime, and only 15 were Oz books (counting a short story collection). Even in death he was not able to escape Oz, as in a state of tenuous after a stroke and a short coma, he awoke one last time to tell his wife "Now we can cross the Shifting Sands." note  This being one of the areas of the Deadly Desert that surrounds Oz.

Before being utterly trapped by Oz, he wrote a number of other works, such as his first best selling book Mother Goose in Prose, and The Life & Adventures of Santa Claus.

Works by L. Frank Baum with their own trope pages include:

Other works by L. Frank Baum provide examples of: