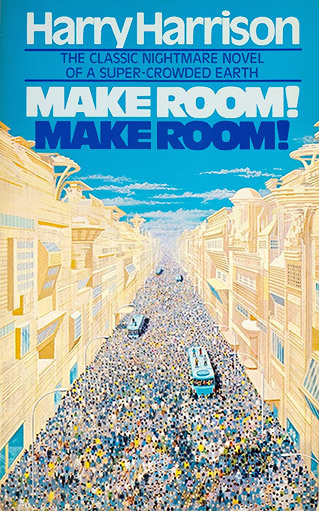 "Titan was like most planets: too many mouths, not enough to go around."
— Thanos, Avengers: Infinity War
Advertisement:

The population of an area, whether it be a small region, a country, a planet, or a Galactic Superpower has grown so large it is causing problems. The result might be societal instability, war, ecological catastrophe, cannibalism... the specifics do not really matter — what matters is that there are too many people and it is causing problems. This is often a feature of a dystopia and Cyberpunk, and can be used as a form of Green Aesop about uninhibited growth in a finite area.

May be prevented or resolved through the use of Population Control, settling new, uninhabited places, or even good old-fashioned Depopulation Bombs if the powers that be feel it is the only way. If unhandled, the crisis can cause The End of the World as We Know It if it grows severe enough as riots run rampant for what resources remain.

This is one of the threats of the Explosive Breeder — even if it's not malicious, the sheer amount of offspring will eventually cause trouble if left unchecked. An Eco-Terrorist may resort to a Final Solution largely out of fear of a Malthusian crisis.

The idea of overpopulation is often used by proponents to justify genocidal policies, arguing that it is easier to reduce or control the population ("coincidentally", it's usually a specific population they personally dislike or don't care for) than to figure out ways to increase or share the resources available to everyone. Sufficed to say, depending on which population they decide must be culled, it can get pretty racist and classist.

The Earth-centric version of this trope is largely broken in contemporary and 20 Minutes into the Future stories due to technological advancements in our real world: for example, if anything our industrialised farming and agricultural technologies lead us to over-produce food, and problems with starvation are more about political and economic questions of distribution (aka "who is permitted access to the food?") rather than "we do not have enough to feed everyone". Many nations have also started to project a population decline (and all the problems that brings) due to undergoing demographic transition. However, this hasn't stopped people using the idea of overpopulation as a bad faith argument for their own agendas (such as anti-immigration).