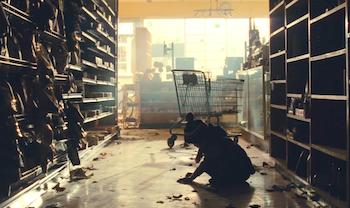 On the bright side, no more standing in lines.
"Did you ever try to put a broken piece of glass back together? Even if the pieces fit, you can’t make it whole again the way it was. But if you’re clever, you can still use the pieces to make other useful things. Maybe even something wonderful, like a mosaic. Well, the world broke just like glass. And everyone’s trying to put it back together like it was, but it'll never come together in the same way."
— Moira Brown, Fallout 3
Advertisement:

A staple of Scavenger Worlds set After the End, the Disaster Scavengers are just that, people who have resorted to scavenging for food, clothes, and supplies from the rubble of their once prosperous world. While most heroes in these settings are Disaster Scavengers to an extent, they differ from rank-and file-scavengers because they haven't given up on the dream of a better world.

"Scavenging" tends to include stealing as well, and Disaster Scavengers are ready and willing to steal anything that isn't nailed down or on fire, even if it's vital to beating the Big Bad or restoring the world. The result is that they end up making things worse by creating mistrust and animosity, hampering any efforts to rebuild their community and set the world right, dooming themselves and others to dying in droves.

The Elephant in the Living Room for such a society is that eventually, as with any non-renewable resource, you're going to run out of workable stuff that the previous society left behind.

They usually get into conflict with heroes like The Drifter by trying to steal his Rare Guns. He invariably catches the thief and gets his things back, and more often than not befriends the thief, usually a grimy child survivor, and getting a Morality Pet and Side Kick out of it, who can also vouch for him with the rest of the Untrusting Community. Sweet!

Contrast Noble Shoplifter. In a Cosy Catastrophe, this character is likely to be The Scrounger, and if they live near the coast they're Salvage Pirates. If multiple groups come into conflict, you'll have an Archaeological Arms Race on your hands. Expect Disaster Scavengers to frequently be Reduced to Ratburgers when their scavenging attempts fail to turn up other food.

That doesn't mean all Scavengers Are Scum, however. That would be an entirely different trope.