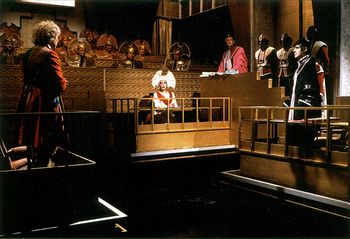 "Tell the truth: are you worried about my interference in other civilizations or just jealous of my coat?"
"Oh! Why'd you stop it at the best bit? I was rather enjoying that."
—The Sixth Doctor after footage of his adventure is cut, which might as well be him commenting on the ending of Colin Baker's reign as the Doctor.

The one where the stakes were at their peak.

In 1986, Doctor Who was being targeted by The BBC Controller of the time, Michael Grade. He did not like the way the production values had been outdone by more breathtaking visuals of sci-fi big screen films (apparently ignoring the stringently limited budget the series was given) and felt that the increasingly violent and cynical direction the show had been taking was making the show unsuitable for British airwaves. Grade threatened to cancel the series, screening the infamous karate-kicking scene from the earlier Fifth Doctor-era serial "Warriors of the Deep" to other BBC execs to demonstrate why he felt the show deserved to be axed, and outright pulled it from the air after the unprecedented amount of carnage in "Revelation of the Daleks" made him draw the line. However, with some negotiation the intended cancellation was reduced to an 18-month hiatus (twice the length of a standard between-season gap), after which the show resumed regular airing.

The original plans for Season 23 were shelved— the stories that would have been made received varying fates; scrapped before anything was known about them, never made because the writers passed on without divulging much of their plans for a storynote such as one unmade serial given the working title "Yellow Fever and How to Cure It", since Robert Holmes got ill and died near the end of May that year, and vague details suggesting another story would have written by Michael Feeney Callan, "The Children of January", they were eventually either turned into novelisations or picked up decades later as Big Finish Audio productions (the "Missing Adventures" audio series, in particular). What the viewers got instead were four stories that cast a reflection of the show's own shaky terms on the air, "on trial" as it were, kitted into one overarching season. So began The Trial of a Time Lord, a season-long serial broken into four smaller sub-stories and totaling at 14 parts.note Sources differ as to whether The Trial of a Time Lord is a single serial in its entirety or four serials encompassing an overarching plotline like the "Key to Time" arc in season 16. If it is counted as a single serial it'd be the longest in the show's history, beating out "The Daleks' Master Plan" twenty seasons prior by two parts. For the sake of convenience (trying to devote one page to summarizing and thoroughly analyzing an entire season is no small order, after all), most wikis, this one included, treat the four sub-stories as if they were separate serials. This is supported by the fact that despite the overarching title, they were considered separate serials for production purposes — the four component stories have separate production codes, writers and directors.

As story one of The Trial of a Time Lord, "The Mysterious Planet" is Doctor Who writer Robert Holmes's last complete story script. His actual final script, "The Ultimate Foe", was never finished before his death, and only his material for the first part was used; the second and final one was rewritten from scratch following Holmes' death due to legal difficulties.

Episode one opens with a sweeping motion-controlled shot of the Time Lords' space station. The Doctor stumbles out of his TARDIS and enters a courtroom, where he is informed that an Inquiry has been set up to examine his actions. Very quickly the old "I'm the Lord President" escape clause is revoked when the Inquisitor tells the Doctor he was deposed after the events of "The Five Doctors" because he never showed up.

And so the trial begins, which basically consists of the Doctor and the court watching Doctor Who episodes.

The Valeyard starts the Trial with footage from the Matrix of the Doctor's interference on the planet Ravalox, a planet with the same mass, angle of tilt and period of rotation of the planet Earth, which it is. Ravalox also was supposedly ravaged by a solar fireball. We learn most of these facts as the Doctor and Peri are walking through a forest. We can also see that the Doctor/Peri relationship has elevated past the bickering of the previous season. Unknown to them, they're being watched by Mr. Sabalom Glitz and his assistant Dibber, two likable criminal types. Glitz has the Doctor in the sights of his gun, but at the last possible second the Doctor ducks down.

Peri discovers the remains of a building, grabbing the attention of the Doctor. The Doctor soon discovers the entrance and they enter a tunnel network. Peri makes a startling discovery. She discovers that They are actually in The London Underground at Marble Arch Station. This puts the "is this Earth?" plot to bed and starts the "how can this be Earth" plot, seeing as Ravalox is several light years from Earth's solar system. The Doctor finds a door and theorizes that there may be some inhabitants alive in the tunnel network. Peri declines the offer to explore and waits at the entrance and is promptly captured.

Meanwhile Glitz and Dibber approach the local savages in the hope of destroying a "Magnum Mark VII Light converter", which the savages are using as a Totem Pole, and salvaging the valuable material it's made from. They are taken to meet the Queen of the tribe.

Back in the tunnels, the Doctor is learning about the world he has arrived in from "Balazar, the Reader of the Books". Apparently, three Books have survived from times past. They are:

Back at Marble Station the stoning is ready and the Doctor stands ready. As the stoning begins he opens his umbrella and begins deflecting the stones, but one hits him and he drops to the ground.

We jump back into the courtroom where the Valeyard quickly demands that the Inquiry escalates into a Trial, a trial that, if the Doctor loses will end in his execution. Paralleling what the actual show was going through at this time. Not getting sufficient "Grades". (Sorry!) It turns out the Doctor is unconscious not dead. A guard is about to kill him when Drathro orders that the Doctor is brought to him.

Peri is dragged into the savages' village and taken before the Queen who wants to marry her off to several men.Back underground we discover that Drathro has two helpers, Tandrell and Humker, who he orders to activate the service robot, "in case they need it".

Peri is placed under Guard with Glitz and Dibber who have an Oh, Crap! moment when they learn that the Doctor is a Time Lord. Glitz is then sentenced to death for being a "Star traveler".

Drathro orders the Doctor to fix the circuits connected to the Black Light converter, but the Doctor soon escapes by shocking Drathro and fooling the Service robot.

Glitz, Dibber and Peri escape, Glitz and Peri try and reach Marble Arch and Dibber stays behind to destroy the light converter. Drathro sends the service robot after the Doctor. Meanwhile Merdeen, the head Guard, tells Balazar how to leave the tunnels so that he can join the savages on the surface — unaware that Grell, one of the guards, is spying on them.

Back on the surface Dibber blows up the Light Converter and joins Peri and Glitz in escaping to the underground. The Doctor, Balazar, Peri, Glitz, and Dibber all meet at the tunnel entrance but are forced to flee back underground by the chasing savages. When they reach Marble Arch they find that the service robot is waiting for them and now they're trapped between that and the savages. The Doctor and the others drop to the floor as the savages fire at the robot with the guns they took from Glitz and Dibber, disabling it. The Doctor is less than happy when he discovers that Dibber blew up the light converter. He tells them that it could set off a chain reaction.They are all then taken to the Savage's village.

Back underground Grell confronts Merdeen about his actions. Merdeen is saved by Drathro who orders him to search for Balazar. Tandrell and Humker manage to re-activate the Service Robot.

The Doctor, Peri, Glitz and Dibber are placed under guard. At this point it is confirmed that they are on Earth. But the service robot smashes through a wall, knocks unconscious and kidnaps the Doctor. The savages shoot the robot and disable it for good, and think that they have killed "The Immortal" and move to attack the underground settlement. The Doctor regains consciousness and rushes off to warn the savages. He explains to Peri that if he doesn't deactivate the black light system it will implode, destroying the tunnels.

Glitz explains to Dibber not to tell the Doctor that what they're after is INFORMATION FOR THE EYES OF THE HIGH COUNCIL ONLY. Literally what is said is bleeped out. The Valeyard says that that part of the evidence has been removed by order of the High Council. The Inquisitor is not pleased, pointing out that the trial was ordered by the High Council (Foreshadowing!), and that it is her job to decide what is relevant evidence. The Valeyard says the the evidence was "against the public interest", and that she alone can watch the uncensored version.

The Doctor and Peri are hurrying through the tunnels when Merdeen steps out from behind them and points a gun at the Doctor. Merdeen fires the gun and hits who he was aiming at, Grell, who really was going to shoot the Doctor. Tandrell and Humker, knowing that the Black light system will implode, open the door to escape and let the savages in. Drathro kills the Queen of the savages and one other savage. He then tells the rest to stand outside the door and wait for their death, which they bizarrely do.

Glitz meanwhile is telling Dibber what they're after, which is secrets from "the CONFIDENTIAL, the biggest net of information in the Universe". The Doctor is furious that yet another bit has been bleeped out; again the Valeyard states that that piece of evidence is for the Inquisitor only.

Realizing that the black light power system is dangerously close to blowing up, the Doctor suddenly claims that when it does so, it will very likely destroy the entire universe. Not entirely surprisingly, Drathro doesn't buy this, and uses a big helping of Insane Troll Logic to justify letting the impending explosion blow everyone to kingdom come.

Merdeen, Peri, Glitz and Dibber try and Sneak into Drathro's room via the food preparation system. Drathro activates the system, nearly slicing them with lasers. Dibber blasts away out through one of the walls into Drathro's room. Glitz sweet-talks Drathro into leaving with them and bringing the secrets with him. Drathro tells Giltz to tie the Doctor up. Glitz ties him with a slip knot. The Doctor contains the explosion to Drathro's room. Drathro dies and and the secrets melt. The Doctor muses over a few unanswered questions like "Who moved Earth out of the solar system?" and "what were Glitz and Dibber after?".

Back in court the Doctor points out that The Valeyard's evidence actually helps him and states that it is his turn to produce evidence. The Inquisitor tells him that the Valeyard has not finished.

The Doctor states "Wake me when it's over."

The Valeyard announces that "The most damning is still to come".