Recap / Doctor Who S23 E3 "Terror of the Vervoids" 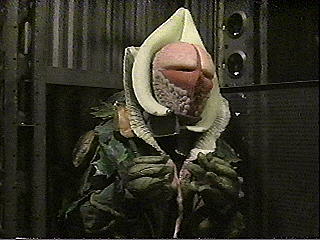 Anything remotely Freudian you see in this picture is purely the product of your dirty mind. The Doctor's coat (fortunately not pictured here!), on the other hand, isn't
"This is a situation that requires tact and finesse. Fortunately, I am blessed with both."
— The Doctor neatly sums up how awesome he totally is and not fluffing his own ego. Or not. Or both.
Advertisement:

The one with the killer clitorises.note There! We said it! Also the one where Bonnie Langford screams in tune with the theme song.

Written by Pip and Jane Baker. This four-episode serial first aired from November 1—22, 1986.

Picking up from where we left off last time, the Doctor has been given some time to recover from his reaction to Peri's unfortunate demise. Still, it's nowhere near time to wrap up the trial. Instead, it's finally the Doctor's turn to present evidence in his "trial." With the reason that he will improve, the Doctor decides to present an adventure that hasn't happened yet (described as his "near future"). We resume watching the Doctor watch... the Doctor.

The Doctor's future companion Mel, who the viewers never get a chance to properly meet, will apparently spend a lot of time badgering him to exercise and trying to persuade him to drink carrot juice. This will result in Colin Baker messing around on an exercise bike, so at least it's somewhat amusing. The Doctor will be relieved when the TARDIS receives a distress call from a luxury space liner, the Hyperion III. Of course, the Doctor can't ever refuse a cry for help (if it will get him away from exercise and carrot juice), so he will decide to assist. Upon entering the Hyperion III, though, the Doctor will declare he "senses something evil" about the place, but will continue on exploring anyhow. Hobnobbing around with the crew for a while, the Doctor and Mel will discover that the distress call was completely faked. But the Doctor will be convinced that the call was real for some reason, so Mel and the Doctor stick around — deciding to enjoy the spaceship scenery for a bit before they'll part ways. The Doctor will nose around, while Mel will randomly decide to exercise.

The Doctor will flirt with the hostesses of the ship, while Mel will overhear that things are going wrong with the secret plant research going on inside the ship's bowels. In fact, some "Demeter seeds" will have been stolen, silver seeds that look like painted stones. So the plant research crew will go to investigate, while the head woman Lasky will berate her subordinates for the fools they will have been. Or something.

Meanwhile, there will be a murderer on the loose, with the body being dumped in the trash compactor. The Doctor and the captain of the Hyperion III, Commodore "Tonker" Travers, will banter while Lasky will continue to berate her subordinates. Mel, for her part, will decide to tell the Doctor about Lasky's strange behaviour — but the Doctor will berate her for trying to be smart, yelling at Mel to go investigate on her own. In the present, the Doctor objects to his own defence presentation — claiming that someone's altering the record of the future. The Valeyard laughs at the Doctor's apparent ineptitude, and the Doctor keeps ranting about the Matrixnote No, not the movie. Different one. being altered, which is apparently impossible. So, the Doctor gets depressed as we continue to watch the future.

Back in the future, Mel will arrive at the hydroponics bay of the Hyperion III and persuade a random crewman to help her investigate. Nothing good will come of this, as the poor random crewman will be electrocuted the second he tries to open it. We will be left seeing the hydroponics bay explode; Mel will scream as the whole thing explodes around her. Meanwhile, a camera surrounded by a green mist will wander around killing people. The Time Lords object to this, claiming that Mel was the one that could have died in the future rather than the hapless crewmen who will die. Why they complain about this when it's in the future is anybody's guess, but Wibbley Wobbley Timey Wimey. Mel will be questioned as to why stuff will blow up when she's around, but Mel will convince everyone that this has to be some sort of sabotage. So, the Doctor and Mel will begin to investigate the crew, and most of the passengers will have something to hide in some form from our investigating duo. In fact, several of them will not be what they seem. It will all be very Agatha Christie, if Agatha Christie had ever thrown in a twist ending in which the hero will have to battle genetically-engineered plant creatures with homemade hand grenades.

As it turns out, most everyone will have a motive for murdering someone. And, as luck would have it, most everyone will also make sure that their actions result in murder as well. The second-in-command of the Hyperion III will decide to hijack the ship for... some reason... but not before another will decide to steer it into a black hole. As you might guess, he will fail. Also, those plant creatures will decide to call themselves Vervoids, who will decide to dedicate themselves to spraying fog in people's faces and toss them onto compost piles. The amount of bodies found on the Hyperion III will rise while the Doctor will futz around, continually flipping between Jerkass and actually trying to figure out what's going on. Finally, everyone but Mel, the Doctor and a handful of the people on the Hyperion III will be dead, and the ship will be getting close to Earth. This is bad, as the Doctor will reveal, if a single Vervoid steps on the Earth, they will become a threat worse than the Daleks (or something like that).

The Doctor will save the day, of course, destroying all the Vervoids before they can get loose and wipe out animalkind with those lovely hand-grenades made of what will be poison to the Vervoids. Back in the courtroom (and the present), the Doctor claims the presentation as evidence that sometimes his meddling is necessary for the greater good, or will be in this case. The Valeyard counters by pointing out that he's just confessed to committing genocide, and calls for an immediate death penalty. The camera zooms in dangerously close to the Doctor's face as the episode ends...