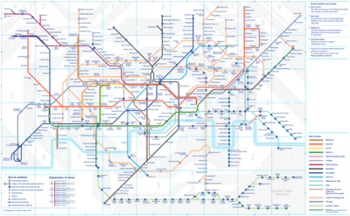 The London Underground is the oldest rapid transit system in the world (its oldest section opening in 1863) and one of the best known. As such, it features prominently in British Media.

Why's it so prominent? Not only is it very old, but it's also London's lifeblood. It reaches most parts of the city, millions of people use it every day, and unless you want to brave London traffic, it's the most reliable way to get around town. If you want to portray typical London life, you're going to be looking at the Tube. Though do be aware, Underground coverage is lacking in most southern parts of Greater London; fewer than 10% of the stations are south of the River Thames.

Wait, the "Tube"? Yep. The Underground is commonly nicknamed the "Tube" because of the tubular shape of its tunnels. It was one of the first underground railways to be built by tunnel-boring machine (i.e. a big drill); this led to the trains travelling in cylindrical tunnels with remarkably little room to spare. The trains themselves are also remarkably cylindrical. The station platforms are housed in bigger tubes, the walkways between them are made of tubes, and even newer stations have the "tube" aesthetic just for tradition. Granted, the oldest lines were made with the "cut-and-cover" method (i.e. dig up the entire street and cover it up again), and quite a bit of the network (mostly in the suburbs) is out in the open, but its most distinctive sections are tubes.note This presents a problem — the Circle, District, Hammersmith & City, and Metropolitan lines are "cut-and-cover" lines with larger, boxier S Stock trains, while the Bakerloo, Central, Jubilee, Northern, Piccadilly, Victoria, and Waterloo & City lines are the true deep tube lines. One way to really annoy viewers is to put one type of train on another type of line.

Okay, anything else distinctive about it? Probably the most distinctive symbol of the tube is the roundel logo

. On the outside, they mark the locations of the stations. On the inside, on the platforms, they have the station's name on them. Every Underground station has its name on a roundel in it somewhere. London's city transport authoritynote The aptly-named Transport for London, which runs all aspects of the city's transit — not just the Underground, but also the buses, ferries, etc. has adopted the logo for use everywhere, but only the red circle and the blue bar mean the Underground. It's a much-imitated symbol as well (but it's copyrighted, so Don't Try This at Home).

The phrase "Mind the Gap" is commonly repeated on the Underground, and it's become emblematic of the system (partly because the phrasing is just so very British). It's a frequently-heard announcement to watch out for the space between the train and the platform — as many stations are curved (but the trains are made of a series of straight lines), you could end up quite a big gap to mind. The "Mind the Gap" announcement was first used in 1968 and has been a mainstay ever since.

It serves a civil defence role, too — in World War II, Underground stations doubled as bomb shelters. This wasn't the original plan (the government built all those nice communal shelters for you to use, and you're hopping into the Tube station?), but people preferred them because they were familiar and less scary. They were arguably safer, but there were six direct hits on stations, three (Bounds Green, Bank and Balham) resulting in a total of 140 deaths. The Tube's worst accident occurred during the war, when 173 people died in a fatal crush at Bethnal Green in 1943 - the government covered it up at the time so as not to dissuade people from hiding there. This may have inspired later metro systems to be designed to double as bomb sheltersnote although the Moscow Metro was designed with this in mind before the war, but the Soviets were a little paranoid.

Also, it has a smell all its own, thanks to the combination of metal, urine, and anxious sweat.

Ew. So it's dirty? Well, yeah — it's been around for a while. In fact, it's far from uncommon to see rats and mice happily scampering around on the lines (and even sometimes on the platform). They survive on whatever they can find, which often includes food dropped by people passing through. There are also rumours of a colony of mosquitoes that's been living in the Tube for so long, they've evolved such that they're now unbreedable with any other kind of mosquito (sort of London's version of the sewer alligator). It is also largely free of AC and, these days, hot - cosily so in winter and sometimes unbearably so in summer (prompting frequent public service announcements to carry water in hot weather - although not to actually drink it, oddly). It started out cool, but decade after decade of human and machinery warmth has sunk so much heat into the surrounding clay-heavy earth it has baked it and left no where further for heat to escape. This is slowly changing; S-stock trains introduced on the subsurface lines brought air conditioning to the Underground for the first time. 2024 will see the "New Tube for London" trains debut on some of the deep level tube lines; thanks to lighter weight and new braking and propulsion technology, it will be possible for the trains to be air conditioned without overheating the tunnels.

Nice colorful map up there. Indeed, the map itself is also kind of famous

— it was designed by engineer Harry Beck in 1931 to be like a circuit diagram. The idea is that you don't need to know the line's exact shape, just where the stations are in relation to each other, so you can make everything clean and geometric.note This was back when the thought hadn't crossed anyone's mind. It's now basically standard procedure on public transport maps. The disadvantage is that sometimes the map will make stations look farther apart than they really are (meaning you could easily walk the distance instead).

Each line of the Underground is a different colour — but they're never referred to by their colours. If you say "Green Line", no one will know what you're on about — you have to call it the "District Line", etc.

Confusingly, the modern Tube map includes a lot of lines that aren't technically part of the Underground proper — the orange lines are London Overground lines (former commuter lines that were shifted to be more integral to the system), and the Docklands Light Railway is an automated light metro system that's not part of the Underground but really might as well be, serving an area of East London that is very lacking in Tube service. On some maps, you might get lucky and see the Croydon Tramway or the Emirates Air Line (a gondola across the Thames that was really just a tourist thing for the 2012 Olympics). Lines have shifted a lot over the years — not only have new ones been built, but some stations have been decommissioned or moved to other lines, so it's not so easy to make the map period-accurate.

Also, thanks to the city's considerable age, you might also come across several stations with wonderfully evocative names, such as East India, Seven Sisters, Elephant & Castle, Tooting Bec, White City, and Cockfosters. Try not to coo too much, because it will make you look even more like an obvious tourist.

Okay, so how do I not look like a tourist? The standard Londoner behaviour on the Underground is to not look at anybody else. (This is not easy to do, as the seats face each other.) Read a book, read the newspapers people leave on the seats, or else stare at nothing in particular. Part of this may stem from the high value the British place on personal space, which diminishes very quickly in a crowded train car — it's like a prolonged, sideways Uncomfortable Elevator Moment.note Interestingly, people from Oop North claim that they can (and often do) easily find each other on a given Tube train — by looking for anyone else who's acting as if other human beings are present.

So then is there anything that I shouldn't do on the Tube to avoid annoying the locals? "Walk Left, Stand Right" — a common admonition seen on Tube escalators. Many people using the Tube are in a hurry, and the left side of the escalator is for those people, to pass the ones standing on the right. Don't stand on the left or leave your luggage on the left. Also, don't hang around at the end of the escalator, and wait for people to disembark the train before getting on. The English being English, they won't call you out on it per se, but you might hear them muttering under their breath about you being a bloody tourist.

All right then. So does it feature in fiction often? Indeed it does — and sometimes it's the real thing, as Transport for London will let you film down there

, as long as you ask for permission first. This allows them to nix anything that's a bit too much like a terrorist attack (the Tube being a high-profile target and having suffered several over the years). The Tube has its share of closed or disused stations where they'll let you film without risk of disrupting the actual system (most commonly the abandoned Aldwych on the Piccadilly Line for period scenes or the old Jubilee Line platforms of Charing Cross for modern settings). But if that's not good enough, filmmakers have been known to mock up Tube stations (with varying degrees of accuracy).

Any more advice? Check the map — make sure you know what's where. Railfans are persistent (even more so than nitpicky Londoners), so they'll call out any obvious mistake you make. The map is your friend.

Current lines in the system are:

Four of the eleven London Underground lines are subsurface lines. They are best defined by featuring tunnels just below the surface and of a similar size to those on British main lines. They also all radiate off a circular loop around Central London, sharing tracks with one another. The Hammersmith & City and Circle lines share all their stations and most of the track with other lines. All four subsurface lines share a uniform fleet of trains, the S Stock, which are also the only trains on the system to allow you to move between cars while the train is in motion.note Though it should be noted that there are two distinguishable variants to the S Stock: the inner-city District, Hammersmith & City and Circle lines use S7 Stock trains, which have seven cars and all-longitudinal seating as befitting the higher passenger traffic closer to central London. The Metropolitan line uses S8 Stock trains, which have eight cars, and like the A Stock trains they replaced, have a mix of transverse and longitudinal seating on account of the longer journeys passengers are making from the far outer suburbs.

The deep tube lines are the lines which give the London Underground its nickname of "the Tube". They run with cylindrical shaped trains that are designed to fit in narrow circular tunnels with a diameter of about 11 feet 8 inches (3.56 m), lined with cast-iron or precast concrete rings, which were bored using a tunnelling shield. For the most part, the deep-tube lines run on their own tracks and do not share them with any other line. Three exceptions exist: the Uxbridge branch of the Piccadilly line shares track with the District line between Acton Town and North Ealing, and with the Metropolitan line between Rayners Lane and Uxbridge; and the Bakerloo line shares track with the London Overground's Watford DC Line north of Queen's Park.