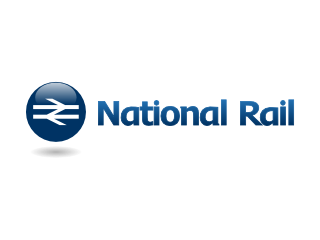 "Britain's train companies working together".
The supply of an Empire
Where the sun never set.
Which is now deep in darkness,
But there railway's there yet.
— The Pogues, "Navigator"
Advertisement:

Formerly British Rail and British Railways before that, this is the current collective brand name for the main railway network of the island of Great Britain (Northern Ireland and the Republic of Ireland have their own separate network with a completely different gaugenote run by Northern Ireland Railways (NIR) in the north and Iarnród Éireann (IE) in the south).

The British railway system was the first in the world and one of the most developed, but is now somewhat smaller than it was in the past. This was significantly due to a man named Dr. Richard Beeching who helped close down about a third of the network (mostly smaller branch lines, but it also included most of the longer Great Central Railway (GCR) from London to Manchester via Leicester, Nottingham and Sheffield) on grounds of economic non-viability (he proposed further cuts but these were rejected). This didn't really work and some of the lines have since been reopened as railway use has grown, with further reopenings planned or actively campaigned. In addition, there is a controversial proposal to build a up to 250mph (400 km∕h) high speed line from London to Manchester, dubbed 'HS2', which may or may not see the light of day.

, in 1921 the government amalgamated these into four big networks, known as "The Big Four". These were:

After the Second World War (where the large number of different networks made the system more resilient than the centrally planned networks of mainland Europe), the network was nationalised and became British Railways (later British Rail). Northern Ireland Railwaysnote Briefly called the "Ulster Transport Authority" was then created in Northern Ireland to run the system there, and today is still functionally separate from the National Rail system in the rest of the UK.

British Railways operated a collection of rolling stock from Victorian-era six-wheelers and locomotives still eking out an existance on branch linesnote At least partially due to the disruption of the Second World War, which probably kept many older designs that would otherwise have been scrapped around for at least a decade past their intended replacement dates to the top-link express locomotives of the big four and their predecessors, their own advanced designs and the harbingers of modernisation such as the electric blue and bespeedwhiskered Deltic prototype and GWR railcars. The late '50s to early '60s were probably the golden age of trainspotting as a result.

British Rail operated for most of its life in a regional basis centred on London in a manner analogous to the Big Four with Scotland as a separate region; the old LNER routes became Eastern Region, for example. In 1982, this was 'sectorised' into three groups, called (at the time of privatisation), InterCity, Network SouthEast and Regional Railways. In addition, there were six Passenger Transport Executives that ran local services in the bigger urban areas like Manchester.

Privatised under the Major government, the track maintenance was ultimately (quite effectively, although the government wouldn't admit it) renationalised after Railtrack decided that it was a shopping mall company which couldn't really be bothered to run a rail network, replaced most of its skilled engineers with unskilled casual labourers working for £5 an hour, 'lost' most records of its infrastructure assets i.e. what was built when and how, became one of the first British corporations to be prosecuted under the Corporate Manslaughter Act after two fatal train wrecks caused by -surprise surprise- sloppy maintenance, deliberately adopted a culture of defiance (its words) to its own regulator, virtually shut down the system in a panic for months to make up the maintenance backlog, and then went bankrupt. This did not make the already controversial decision to privatise the rail network any more popular.

It was also thought that passenger numbers were in decline or would remain stagnant at best. In reality whilst the percentage of people choosing rail over other forms of transport has not changed, the population has as has overall travel across all modes of transport, and passenger numbers have increased appropriately. The network now carries more people now than in the late 19th c. when it had a monopoly.

It is now a collection of 24 passenger train operating companies (plus freight companies), which change ownership and name fairly frequently, as networks are merged, split or franchises get revoked early - as in the case of the infamous Connex. These companies frequently incorporate the name of their owner into their name (Govia Thameslink Railway or Abellio Greater Anglia) or reference a historical Big Four company (Great Western Railway).

Note that the ticket and pricing structure is insanely complicated and often even railway company staff don't know the best option to offer you for your journey. There are apocryphal reports that one particular journey had 30 different ticket options available to choose from at that time. Your best bet is to use one of the many online ticket finder websites to find the best deal. Beware - some tickets are only valid between the specific stations mentioned - if you alight at a different station, even if it's before the one you were supposed to get off at you may risk a fine!

As of 2015, the Labour Party under Jeremy Corbyn have promised to renationalise the entire railway network, which pretty much everyone seems to think is a good idea.

The British railway system also has the distinction of hosting the world's most scenic railway journey, as voted by the travel magazine Wanderlust. The West Highland line, which links Glasgow to the highland port towns of Oban and Mallaig, has held the title for three years, beating the Trans-Siberian Railway and the Cuzco-Macchu Picchu line in Peru. It passes over Rannoch Moor and the Glenfinnan viaduct, where Harry Potter was attacked by Dementors. In summer, part of the route from Fort William (sleeper trains run from London Euston) to Mallaig is covered by regular steam trains marketed as "The Jacobite" and which sell a large array of Potter merchandise.

Much of the network is centred around London and the famous rail termini. Some of the relevant lines will described under each.

London has several major railway stations, referenced in media (there's even a case from The Railway Series where engines argue about which station is London, not realising they are all correct). In all, at least twelve stations in Central London open today can be counted as being "major" termini - rather more than the number in other large cities (for comparison, Paris has six, Berlin four, and New York twonote Although the low number for New York can be attributed in part to the general decline of rail travel in the United States and in part to the American mania for "union stations" - that is, single stations to host multiple railroads (New York Penn presently plays host to three, even with the decline) - the fact that the rail-crazy Europeans also have fewer stations just goes to show how strange London is.). This is in large part because of the aforementioned bit with the large number of railway companies in Britain; each liked to operate its own smaller station rather than gather together in a few larger ones. So we now have twelve big stations. In clockwise order from the West direction, these are the current ones:

All these stations, again, are in Central London. Paddington, Marylebone, Charing Cross, and Victoria are in the City of Westminster; Euston, St. Pancras, and King's Cross are in the Borough of Camden; Liverpool Street, Fenchurch Street, Cannon Street, and Blackfriars are in the City; London Bridge is in Southwark; and Waterloo is in Lambeth.

In the late 1960s, British Rail bought the TOPS computer system from Southern Pacific to keep track of its rolling stock. They allocated numbers to their locos, ships (yes, they did own some ships through their Sealink ferry business) and multiple units in a numbering system that survives with some changes to this day - The Other Wiki has more information

. In addition, the Southern Region inherited a multiple unit system from the Southern Railway that still sort of survives today in unofficial form and you will generally hear the Southern classification used for these units in favour of the TOPS one.

Most of the trains in regular service the network now have automatic doors, while the rest have doors that are locked remotely pre-departure and can be opened only after arrival. Bizarrely, to leave a non-retrofitted Mk3 carriagenote still the most common type on long-distance servicesyou must open the window, lean out of it, and use the door handle on the outside - much to the confusion of uninformed tourists. Not counting the Eurostar trains, the fastest ones on the network are the Inter City 125, the current confirmed record holder as the fastest diesel-powered train at 148 mph (238 km/h), the Class 91 "Intercity 225" loco-hauled trains found on the East Coast Main Line, the Class 390 "Pendolino" units on the West Coast Main Line, and fastest of all (at 140mph top speed) Southeastern's Class 395 "High-Speed" or "Javelin" trains, which partly use domestic sections of Eurostar track with overhead wiring, and partly third-rail commuter lines at slower speeds.

Common trains to see on the network today are:

Freight locomotives that can be often seen as well:

It is common for trains to be 'cascaded' as one operator gets some new trains and passes its old ones to someone else; combined with franchise changes, the change from region to sector-based operation in BR in the 1980s and general new paint jobs, a train can easily go through four or five different liveries in its lifetime.

It's important to note two things about British trains, especially when writing fiction:

National Rail and its predecessors in popular culture

No discussion of the British rail network is complete without discussing its fans, often known as "trainspotters" (inaccurately applying a sub-type to the whole community). "Trainspotters", people who note train numbers as they go past, are depicted as anorak-wearing geeks, even by other railfans.

These people maintain websites, write books, take photographs and work to restore older trains and closed lines. There is also a considerable amount of slang. They usually do not break the law (sometimes helping in its enforcement and rail safety via reporting stuff).

(This is of course, not just confined to the UK.)

Linked to all of this is the very active 'heritage' railway scene in the UK, which got started in the 1960s as BR removed steam from the main line and Beeching was removing lines from the passenger maps. A good number of old locomotives were saved from scrapping by a Barry Island owner who decided it made more economic sense to sell them to the preservation movement note This was mainly due to the price of scrap metal being depressed as a result of mass engine scrapping and engine scrapping being labour intensive — As a result, over 200 locomotives that should have been scrapped stayed in existence long enough for the emerging preservation movement to ultimately rescue them. The Barry survivors also are partially why Great Western locomotives are common in preservation and LNER locomotives are rare — lots of GWR engines ended up at Barry, while hardly any LNER engines did. than cut them up. Many of these run on (mostly) single-track heritage lines that are reopened passenger lines, where they have been joined by ex-BR locomotives and some Diesel Multiple Units, but there are companies that do fairly expensive steam tours on the mainline, something guaranteed to make regular users gawp in amazement.