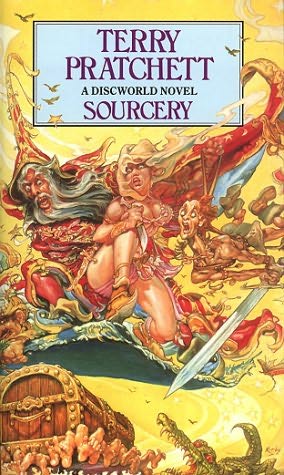 There was an eighth son of an eighth son. He was, quite naturally, a wizard. And there it should have ended. However (for reasons we'd better not go into), he had seven sons. And then he had an eighth son... a wizard squared... a source of magic... a Sourcerer.
Advertisement:

The fifth Discworld novel and a return to Rincewind as central character. Very much a sequel to The Light Fantastic in style, plot and humor.

Unfortunately, there's a very good reason why the Discworld has no Sourcerers. The Sourcerer's powerful magic makes him into a Physical God, and he unites the wizards of the Unseen University in an attempt to Take Over the World. The ensuing all-out magical war threatens the very existence of the Discworld itself. Once again, it falls upon the reluctant Rincewind to save the world... somehow.

The preface includes Pratchett's story about the Luggage being inspired by an American woman tugging a large, recalcitrant suitcase on wheels (which he later admitted he wasn't sure he hadn't made up or not) and adds, "This book does not contain a map. Please feel free to draw your own."

Pratchett has commented that Sourcery is his least favorite book of the series, saying he wrote it out of pressure by fans to do another Rincewind book.

Preceded by Mort, followed by Wyrd Sisters. Preceded in the Rincewind series by The Light Fantastic, followed by Eric.

Not to be confused with Sorcery!