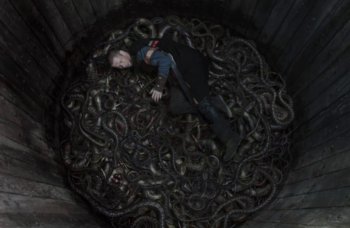 Pythons? In England?
"When he had been taken and cast into prison, his guilty limbs were given to serpents to devour, and adders found ghastly substance in the fibres of his entrails. His liver was eaten away, and a snake, like a deadly executioner, beset his very heart. ... The executioner beheld him beset with poisonous beasts, and asps gorging on that heart which he had borne steadfast in the face of every peril."
— Gesta Danorum, book 9: the death of Ragnarr Loðbrók
Advertisement:

A Snake Pit is the terrestial cousin for Shark Pool: a pit or container full of venomous or otherwise dangerous snakes, other reptiles, arachnids (commonly spiders or scorpions), rats, or other nasty creatures. The victim is supposed to get killed by multiple angry animal bites or stings. While this is a very nasty and historically plausible way to get killed, it is also fairly impractical.

This trope plays on the often irrational fears many people harbour towards reptiles and arachnids. It likes to pretend that the little crawlies are tiny monsters programmed by nature to attack humans, and therefore will swarm in droves upon a hapless victim if given the chance. In reality, most such creatures avoid humans; stinging or biting us is exclusively a defensive behavior... though, if the pit is too crowded to keep a distance, a defensive bite is probable.

A subtrope of Fed to the Beast. Compare Creepy-Crawly Torture.