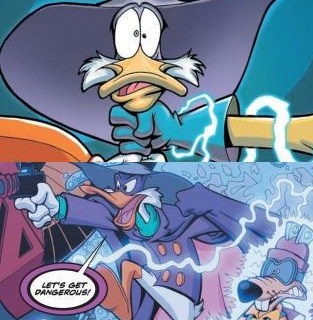 Things are looking bleak. The protagonist and his allies are in a corner; the villain's kung fu is stronger than theirs. Outnumbered, outgunned, the situation calls for heroism, and unfortunately for our heroes, the only people around are all comic relief, sidekicks or mentor figures who've never really stepped up to the plate, when they aren't mere Boisterous Weaklings.

Hey, what are they doing? Don't they know that they're outside the Competence Zone? They're prime C-List Fodder! They're... punching the villain through a wall?

A moment in the story when all the quirky, eccentric supporting cast members, or Super Zeroes, stop being quirky and eccentric and start demonstrating their real skill. In effect, it can often be similar to taking a level in badass, except that really, when you think about it, it makes more sense. It's not so much that they pull the power from nowhere. Rather, these characters have always had that power, and it's simply that now they get to show it in a way that doesn't steal the hero's screen time. In some cases, they may even have been actively failing to demonstrate this much-hyped power before.

The Trope Namer is the Catchphrase of Darkwing Duck, a bumbling hero whose utterance of the phrase marked the point in every episode where he would set aside his enormous ego and start taking things seriously, demonstrating his true competence as a crimefighter.

Sometimes preceded by Lock-and-Load Montage or a "Hell, Yes!" Moment, depending on the circumstances.

Any Retired Badass can pull off this trope if sufficiently provoked. Hobbits are also particularly likely to have it occur every so often. Can overlap with a Heroic Second Wind, "No More Holding Back" Speech, The Coats Are Off, The Glasses Come Off, Alternate Catchphrase Inflection, and/or a Pre-Asskicking One-Liner.

See also Giving the Sword to a Noob, The So-Called Coward, Good Is Not Dumb, Scrap Heap Hero, Not-So-Harmless Villain (the Evil Counterpart), Lethal Joke Character, I Am Not Left-Handed, This Means War!, Misfit Mobilization Moment, and Badass/Heroic Bystander. When a whole civilization decides to get dangerous, this is a Superweapon Surprise.

Contrast Miles Gloriosus, when a character acts like a badass, but in a fight he's a Dirty Coward.

Please do not confuse this with Crouching Moron, Hidden Badass, which is when a genuinely ditzy and harmless character demonstrates bouts of superior skill — and these moments are accompanied by a change in personality or powers.

Laid-back Miis can sometimes become so unusually focused that they deal twice as many damage.

Laid-back Miis can sometimes become so unusually focused that they deal twice as many damage.