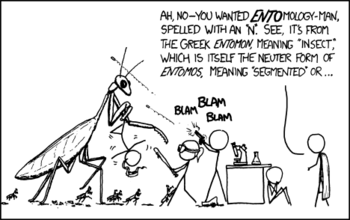 "Faster than a doughnut! Stronger than cardboard!"
— Description for Wario-Man, WarioWare Touched
Advertisement:

Many people feel that the Super Hero is an inherently silly concept. And certainly, many of the genre's conventions — such as the use of strange, skintight costumes, Something Person names, and paper-thin Secret Identity disguises — might look silly in Real Life. However, within their own setting, superheroes are usually accepted and admired.

Certain characters are so obtuse that even other superheroes view them as — well, dumb. Some people tend to use the derisive name "Super Zeroes" for these.

Most of these characters are intentionally created to be that way. Others end up that way due to later Alternative Character Interpretation. Their purpose is mostly to serve as Plucky Comic Relief, although they can be used in other ways.

There are several types of "super zeroes". There's the character who might actually make a good superhero... if he had anything resembling useful powers or skills. Often their powers will also be (or make them) bizarre or disgusting in appearance. Real heroes will try to dissuade them from fighting crime, but usually they insist on trying anyway, getting themselves (and others) in danger. They usually end up scolded by other heroes and retiring after causing a particularly bad mess, though other times they continue being a thorn on an established hero's side, especially by trying to become that hero's sidekick. Often they inspire pity in fans, and might even become an Ensemble Dark Horse. In such a case, they might actually get better with time, evolving into true heroes. DC Comics' Legion of Substitute Heroes is an example of this type.

Then there's the character who does possess great powers — but happens to personally be such an idiot — or even insane — that he causes trouble anyway. They might even be considered dangerous sometimes. An example would be Marvel's Impossible Man, who can transform into anything and even the Fantastic Four couldn't beat him — but he had the personality of a hyperactive child!

Of course, some characters are both stupid and helpless, just to drive home how wrong it is for them to even attempt to be a hero.

Super Zeroes usually (but not always) look pretty ridiculous too — either their costumes are poorly designed, or they themselves lack the kind of body that makes spandex-wearing superheroes look good. Or both. They are usually the result of a geek trying to live up to his heroic ideals.

A common trope is to feature a story where the "Zero" ends up saving the day despite (or precisely because of) his absurd abilities. Another one is where a proud villain refuses to fight the "hero" for considering him an unworthy foe. If the zero beats him anyway, his shame is even greater.

Yet another trope, though a rarer one, is where the zero gets mistaken for a competent hero by a clueless person. This either ends disastrously, or the zero actually succeeds for once — but with none of his friends at hand to see it happen.

Note that superheroes featured in humorous cartoons or comics do not really fit this trope, as every other character in those is also silly to some degree (though they might think that the superhero characters are dumber than they are).

Note also that this trope applies to many supervillains, especially a Harmless Villain and Ineffectual Sympathetic Villain.

Not to be confused with My Hero, Zero.

Compare Blessed with Suck. Contrast Super Loser, who are characters who gain superpowers... but none of the cool you'd expect comes with the package.