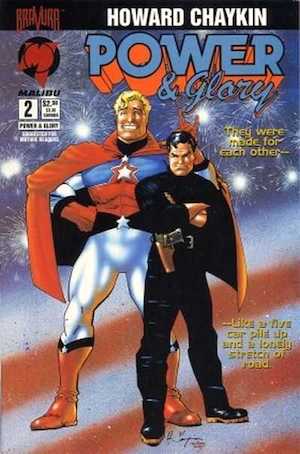 What's a nice Jewish boy like you doing with a metumtam like him?
“Face it — the real world isn’t a god damned comic book. But you had to make an ubermensch — a fantasy solution to real problems”
— Michael Gorsky, issue #3
Advertisement:

Power & Glory is a short-lived Comic Book series written and illustrated by Howard Chaykin, and released by Mailbu Comics as part of their creator-owned "Bravura" line. It was originally released in 1994 as a four-issue limited series and a one-shot holiday special, and was later re-released in a trade paperback.

The title is about A-Pex, "the American Powerhouse", the nation's Real Life all-star super hero complete with blonde hair, boyish good looks, and Heroic Build. In reality, A-Pex is Allen Powell, an amoral, narcissistic government agent with a pathological fear of being touched, leaving him incapable of fighting villains. To prevent Powell from becoming an embarrassment, his handlers bring in Michael Gorsky, a dedicated if cynical agent, to covertly do the real heroic work. Powell takes all the credit, but Gorsky gets the results. Complicating matters is the fact that Gorsky is going through a divorce from his boss's assistant, Powell is chasing after vapid pop star Belladonna, a drug-dealing third-world head of state wants both of them eliminated — and Powell and Gorsky hate each other...

Power & Glory left readers divided, while some finding it too muddled and confusing in its original four-issue format. Fans, however, enjoy it as a hilarious dark comedy that satirizes super heroes and nineties pop culture while providing generous helpings of multi-layered plots, witty dialogue, and over-the-top sex and violence that one would expect from Howard Chaykin.