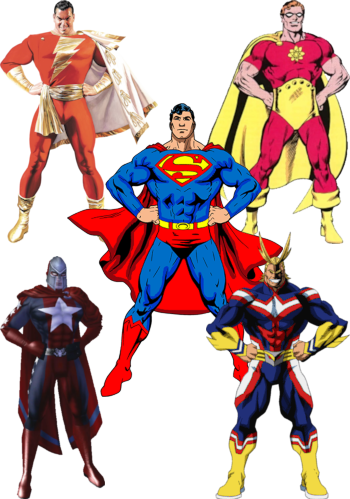 "It's a flock of birds! It's a squadron of planes!"note It's (L-R, top to bottom:) Captain Marvel, Hyperion, Statesman, All Might. Center: Superman
"This tabula rasa for reader's ideal self slowly became overwritten. This being born of motion became too solid. So writers over the years made dummy Supermen: reflections, dissections, parodies and perversions of Siegel and Shuster's Son of Krypton. In DC Comics: Bizarro, Ultraman, Eradicator. In Marvel: Hyperion, Blue Marvel, The Sentry. In Image Comics: Supreme, Omniman. In WildStorm: Apollo, Mr. Majestic. Mark Waid's Plutonian, Garth Ennis's the Homelander. Kurt Busiek's Samaritan. All attempts to understand this ever-more archaic idea: where does that goodness come from?"
— Brows Held High, "Gods, the Übermensch, and the "Unrelatable" Nature of Superman

As the character widely considered the first superhero, Superman is a natural point for any writer of superhero fiction to start with. Consequently, pretty much every superhero universe, whether playing straight, parodying, or deconstructing, contains at least one character clearly intended to be a version of Superman.

There are many reasons for why this trope is so common in superhero fiction. Superman's iconography is easily recognizable, and immediately implies a superhero setting. This makes it easy to twist and put the writer's own spin on it. Superman is also considered the starting point for superheroes, which means discussions of him can have more meaning. While doing an Expy of a character like Batman might come across as critiquing or celebrating only Batman, stories attempting to critique or celebrate the superhero genre can use Superman as a base and be reasonably certain their attitudes can translate across to other characters. Superman is also famously considered one of the most powerful heroes, giving the character and their actions a sense of weight, whether as a hero or a villain. Superman's Older Than Television status and idealistic nature make him an easy target for parody or deconstruction as the embodiment of "The Man". Conversely, often a Superman Substitute is created because a writer wants to write a Superman story, but doesn't want to deal with the trouble of negotiating with DC Comics to handle one of their biggest characters without Executive Meddling, and so creates a Captain Ersatz to write him anyway.

Of course, the simplest one is because he's the only one the writer knows.

This was particularly common in The Golden Age of Comic Books, as the runaway success of Superman meant that many companies were eager to Follow the Leader. Plenty of early superheroes essentially were Superman, with a throwaway origin to grant them their suspiciously similar powers and names like Dynaman or Super-American. The most famous of all was Captain Marvel, who actually outsold Superman at points, leading to one of the medium's most notorious lawsuits. Most modern takes on this trope tend to be more self-conscious, less trying to copy Superman and more trying to play with Superman as an archetype.

These characters tend to include the following traits:

A common variant is to include elements of Captain America, typically by playing up the Captain Patriotic elements and changing the origin to include Super Serum, or Captain Marvel, by adding elements of magic or mythology or some kind of transformation. Expect this character to use lots of Dynamic Akimbo posing, too (our page image being a fantastic example of such).

Notably, DC themselves have acknowledged this at points, suggesting that every world in The Multiverse has at least one of these on it (though some are farther than others).

DC Comics Despite owning the character, DC has a surprising number of these in their main multiverse — either by buying up other companies with Superman Substitutes, or creating them themselves.