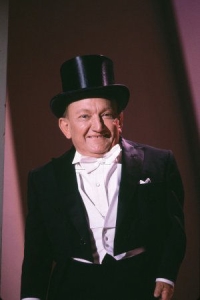 The name of my condition is Cartilage Hair Syndrome Hypoplasia, but you can just call me Billy.
"The greatest thing about Billy Barty was that he never seemed to realize just how famous he really was."
— Robert Wagner
Advertisement:

The stage name of William John Bertanzetti (October 25, 1924 – December 23, 2000), the entertainer, athlete and social activist who founded the Little People of America organization to help little people and their families.

Barty first appeared as an uncredited performer in Busby Berkeley's musicals (typically playing a lascivious kid). He played Mustardseed the fairy in the 1935 film adaptation of A Midsummer Night's Dream. Later he appeared in many Sid and Marty Krofft Productions, most notably Sigmund and the Sea Monsters, and was also the original voice of Epcot mascot Figment. He and Patty Maloney frequently worked together in films and television, as recently as the Batman: Gotham Knights episode "Double Talk". He also appeared in quite a few movies, including cult classics UHF ("Weird Al" Yankovic being a huge fan of his) and Masters of the Universe. He has a memorable role as a door-to-door Bible salesman that Goldie Hawn mistakes for an assassin in Foul Play.

As noted above, Billy was a prominent activist for little people, and was annoyed that his most famous contemporary, Hervé Villechaize, insisted on continuation to normalize the derogatory term of "midget".

Decades after his death, he remains one of the most famous and influential little people in history.